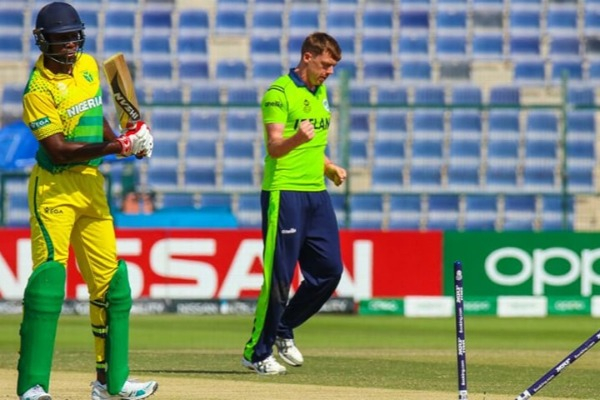 Ireland and Netherlands secured qualification for the play-offs at the World T20 qualifier after registering convincing wins over Nigeria and Bermuda by eight wickets and 92 runs respectively.

Craig Young's four for 13, alongside Mark Adair's two for ten, meant Nigeria always struggled were not allowed to get going with the bat against Ireland and could only register 66 for nine from 20 overs on Saturday.
Ireland were never in trouble as Kevin O'Brien's 32 and Paul Stirling's 11 again got the side off to a fast start, and the target of 67 was reached in just 6.1 overs as they now sit top of Group B on eight points.
However, second place Oman still have one group game remaining.
In Group A, Bermuda were no match for Netherlands as a Dutch record opening stand of 123 put them on their way to registering their highest ever team total of 206 for three.
Ben Cooper and Max O'Dowd both hit 58 and Colin Ackermann bashed a late 43 before Paul van Meekeren took three wickets for 26 as Bermuda could only register 114 for nine in reply, Kamau Leverock top scoring with 31.