Morata makes his point by scoring winner for Atletico 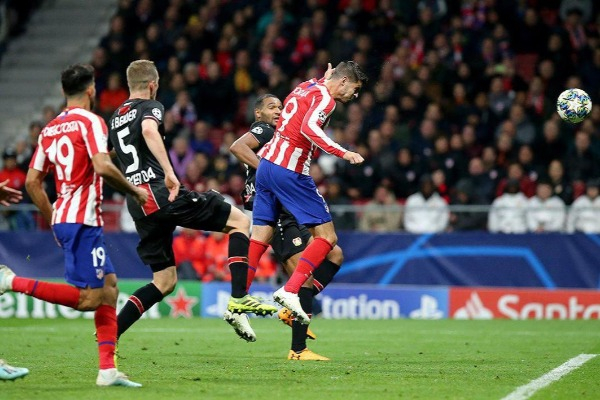 Alvaro Morata came off the bench and rescued Atletico Madrid when his late header gave Diego Simeone's side a gritty 1-0 win over Bayer Leverkusen in the Champions League on Tuesday.

Morata, dropped after missing chances in Atletico's draw with Valencia in La Liga on Saturday, played as if he had a point to prove in a match-winning cameo at the Wanda Metropolitano.
"He started on the bench," said Simeone. "But came on with the motivation of a little boy." Victory leaves Atletico with seven points from their opening three games in Group D and on the brink of qualification, with only top spot seemingly to be settled, most likely with Juventus.
For Leverkusen, three defeats from three all but ends their hopes of progress and continues a disappointing start to the season that also has them sitting ninth in the Bundesliga.
Atletico have been on a poor run themselves, managing only two wins from their last eight games in all competitions and slipping to fifth in the league, behind both Barcelona and Real Madrid.
This was hardly a performance to alleviate concerns, particularly about their fluidity in attack, but Morata's goal at least gets them back to winning and ensures their task in the group stage is almost complete.
"Goals give you confidence and winning gives you enthusiasm," Simeone said.
"The Morata goal brought everyone together." Simeone will have been worried to see his central defender Jose Gimenez forced off injured in the 15th minute. He would appear unlikely to recover in time for Atletico's game at home to Athletic Bilbao on Saturday.
When Mario Hermoso replaced Gimenez, it meant Atletico's defence was made up entirely of summer signings. "We hope the injury is as light as possible," Simeone said.
When these sides last met in the last 16 in 2017, Leverkusen's Kai Havertz was unable to play because of school exams. The promising 20-year-old started up front on Tuesday but was starved of service.
A frantic opening 10 minutes set the tone for a first half that was high on intensity but lacking either creativity or clear-cut chances.
Costa almost pounced after Leverkusen goalkeeper Lukas Hradecky scooped up Angel Correa's shot but failed to keep hold of the ball.
- More ambitious -
==================
Otherwise, frustration grew. Costa lambasted Koke for a missed pass and Simeone castigated Kieran Trippier for losing possession and ignoring a simple ball inside.
After half-time both sides were more ambitious. Costa could have scored, but failed to connect with a free header from Trippier's cross.
Costa then felt he should have had a penalty when Sven Bender slipped and the striker stepped on the fallen defender's hand and went down. Referee Artur Dias waved away the appeals.
Thomas Lemar and Morata came on for Correa and Koke, who was whistled as he departed, only for a furious Simeone to order the fans to clap, which most of them duly did.
Both substitutes were involved in the winner. Lemar drove through midfield and played the ball left to Renan Lodi, who curved a brilliant cross to the near post, where Morata powered in, his header too strong for Hradecky's right hand.
Morata celebrated by running to the bench. He was feral in the remaining minutes, rampaging at Leverkusen's back-line and chasing down as many clearances as he could.
Kevin Volland had Leverkusen's only sniff of an equaliser but his finish was blocked and Atletico held on.