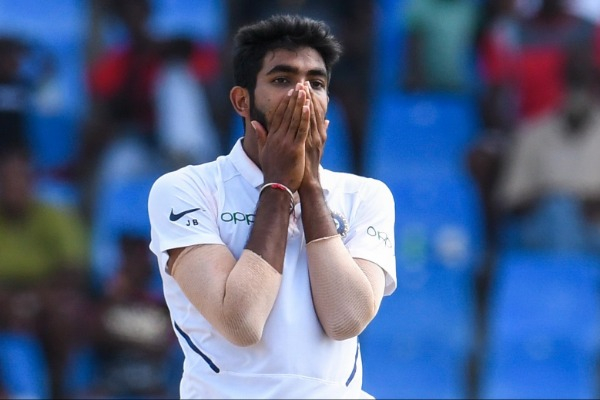 In a major setback to India, pace spearhead Jasprit Bumrah was on Tuesday ruled out of the upcoming Test series against South Africa due to a stress fracture in his lower back, which might also force him out of next month's assignment against Bangladesh.

Fellow paceman Umesh Yadav replaced him in the Indian squad for the three matches against the Proteas, beginning in Visakhapatnam from October 2.
"The injury was detected during a routine radiological screening. He will now undergo rehabilitation at NCA and will be monitored by the BCCI Medical Team. The All-India Senior Selection Committee has named Umesh Yadav as Bumrah's replacement," the BCCI said in a release.
A BCCI official, however, said Bumrah could also miss the home series against Bangladesh. That series comprises three T20 Internationals and two Tests, which are part of the the World Test Championship. It will be held from November 3 to 26.
"Jasprit is out for a period of seven to eight weeks minimum. This effectively rules him out of the World Championship games against Bangladesh also. He is out till the end of November. That's how his medical bulletin is at the moment," the official said on conditions of anonymity.
"The good thing is that the detection happened at the preliminary stage and that's why it won't take more than two months to heal. Otherwise, a stress fracture takes pretty long to heal," he added.
Bumrah had been rested from the recently-concluded Twenty20 series against South Africa, which ended in a 1-1 draw.
The paceman, with a sling action, is feared for his immaculate line and length, particularly the perfectly-placed yorkers.
In the Test series against the West Indies, which was his last assignment, Bumrah emerged as the wrecker-in-chief for India with 13 wickets in two Tests.
The 25-year-old became the fastest Indian pacer to take 50 wickets in Tests during the course of that assignment last month. He achieved the feat during the second Test against the Caribbean side.
Bumrah reached the milestone in 11 matches, going past Venkatesh Prasad and Mohammed Shami, who took 13 matches each to touch the mark.
Yadav last played a Test for India in December 2018, during the tour of Australia.
The 31-year-old Yadav, on the other hand, was part of the India A squad that toured the West Indies last month but couldn't make much of an impact.
In the 41 Tests that he has played so far for India, Yadav has 119 wickets at an average of 33.47.
After the lung-opener in Visakhapatnam, the remaining two Tests of the India-South Africa series are scheduled to be held in Pune (October 10 to 14) and Ranchi (October 19 to 23).
India's revised squad: Virat Kohli (Captain), Mayank Agarwal, Rohit Sharma, Cheteshwar Pujara, Ajinkya Rahane (vc), Hanuma Vihari, Rishabh Pant, Wriddhiman Saha, Ravichandran Ashwin, Ravindra Jadeja, Kuldeep Yadav, Mohammed Shami, Umesh Yadav, Ishant Sharma and Shubman Gill.