After blow on neck, Smith's immediate thoughts were about late teammate Phillip Hughes 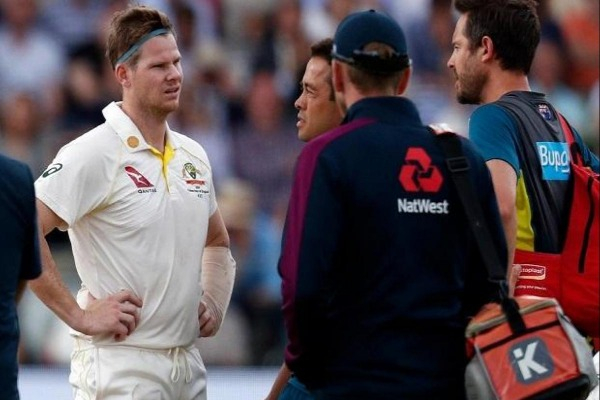 Australian batting mainstay Steve Smith thought about his late teammate Phillip Hughes right after being hit on the neck by England pacer Jofra Archer in the second Ashes Test.

Smith, who missed the third Test due to the resultant concussion, was initially cleared to resume his innings on day five following the nasty blow before he started feeling a "little bit under the weather".
"I had a few things running through my head, particularly where I got hit, just a bit of past came up, if you know what I mean, from a few years ago. That was probably the first thing I thought about," Smith told reporters in Derby referring to Hughes who passed away after being hit by a bouncer in a 2014 Sheffield Shield match.
Smith was found to have delayed concussion which he said, felt like he had too much alcohol.
"It wasn't until later that evening that it hit me. When the doc asked me what did it feel like I said it felt like I had six beers last night and felt a little bit under the weather, without the six beers unfortunately.
"That was the sort of feeling I got, that groggy feeling and that stuck around for a couple of days. Not a nice place to be in but these things happen and unfortunately missed what was a pretty amazing Test match," he said.
With Ben Stokes playing one of the best Test match innings, England pulled off a one wicket win in Leeds, levelling the five-match series at 1-1.
Set to play the fourth Test starting September 4 in Manchester, Smith is expecting a lot of short balls to be directed at him but will not change the way he bats against Archer.
"If they're bowling up there it means they can't nick me off, or hit me on the pad or hit the stumps. With the Dukes ball, I don't know, that's an interesting ploy. So we'll see what happens. I'm not really going to change anything.
"There's been a bit of talk that he's (Archer) got the wood over me, but he hasn't actually got me out. He hit me on the head on a wicket that was a bit up and down at Lord's. He actually didn't get me out so all the other bowlers have had more success against me I daresay," Smith added.