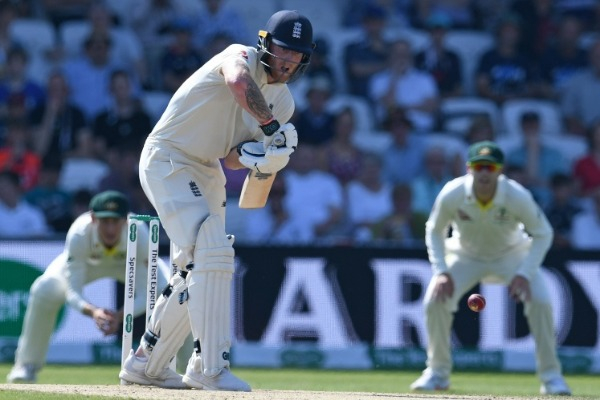 Ben Stokes and Jonny Bairstow maintained England's bid for an extraordinary comeback win in the third Test against Australia at Headingley on Sunday.

At lunch on the fourth day England -- bowled out for just 67 in their first innings -- were 238-4, needing a further 121 runs to reach a victory target of 359 that would see them level the five-match Ashes series at 1-1.
Stokes was 32 not out and Bairstow 34 not out, with their unbroken partnership so far worth 79 runs.
If Australia win this match they will retain the Ashes at 2-0 up with two to play.
But on another sun-drenched day in Leeds, their four-man attack managed just one wicket between them on an increasingly docile pitch during Sunday's first session, with the fast bowlers unable to break through with the new ball.
England's hopes of achieving a victory that would rival their celebrated Headingley Ashes successes of both 1981, when they won after following-on, and 2001 when Mark Butcher's 173 not out saw them chase down a target of 315, suffered a setback early Sunday when England captain Joe Root was out for 77 after adding just two runs to his overnight score.
Root, shortly before the new ball became available, went down the pitch to off-spinner Nathan Lyon's third delivery of the day and tried to work it legside.
But the ball deflected off his back leg, looped over Australia captain and wicketkeeper Tim Paine, with David Warner taking a superb diving catch at first slip.
The end of Root's 205-ball innings left England 159-4 in the 78th over.
England resumed on 156-3, with Root, like Bairstow playing on his Yorkshire home ground, 75 not out after sharing a partnership of 126 in 53 overs with Joe Denly (50) on Saturday.
Left-handed batsman Stokes, determined to keep his wicket intact, was then unbeaten on two, having faced 50 balls.
The scale of the task confronting Root's men was evident from the fact that only three sides have made more than 300 to win in the fourth innings of a Test at Headingley -- Australia (404-3 in 1948), England (315-4 against Australia, 2001) and the West Indies with 322-5 two years ago.
- Stokes hit on the head -
==========================
England had yet to add to their overnight score when Stokes missed an a pull off a Josh Hazlewood bouncer that smashed into his helmet, with the stem guard -- which he was using for the first time -- protecting his neck flying off at the back.
The all-rounder, who made an unbeaten century in the drawn second Test at Lord's, was cleared to bat on, however.
Eventually Root scored England's first run of Sunday's play off the 26th ball of the day only to be dismissed soon afterwards.
Australia took the new ball but it was not long before Bairstow cover-drove Josh Hazlewood for a textbook four through the covers.
Stokes carved Pat Cummins over the slip cordon for another boundary greeted with huge cheers by a capacity crowd before James Pattinson, failing to control the swing, bowled a ball that went for five wides after bursting through Warner's hands.
There was another huge roar from the crowd when Stokes hooked Cummins for a soaring six, with England scoring 60 runs in eight overs with the new ball -- an amazing turn of events given a woeful first innings that saw them post their lowest Ashes total in 71 years.
Lyon returned before lunch in a bid to break the stand but, although he beat Stokes on the outside edge, Bairstow swept him for four.