Cottrell salutes Dhoni for his "love for motherland" 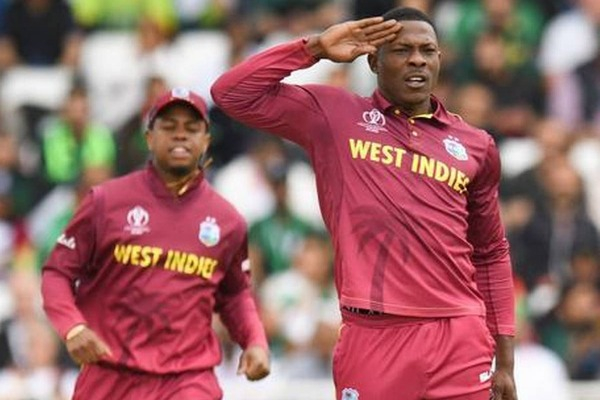 Cottrell, who became popular during the ICC ODI World Cup in the United Kingdom for his trademark salute celebrations, tweeted a series of messages and also shared a video on Dhoni to praise the veteran stumper.
The video was from 2018, when the Indian wicket-keeper batsman was conferred the Padma Bhushan, the country's third highest civilian award, by President Ramnath Kovind at the Rashtrapati Bhawan.
"This man is an inspiration on the cricket field. But he is also a patriot and a man that gives to his country beyond duty. I have been at home in Jamaica with my boys these past weeks and had time to reflect," Cottrell wrote his first tweet.
"I shared this video with friends and family because they know how I feel about honour but the moment between wife and husband truly shows an inspirational kind of love for country and partner. Please enjoy as I did."
Dhoni is an honourary Lieutenant Colonel in the Territorial Army. He is also a qualified paratrooper after having completed five parachute training jumps.
Dhoni, who opted out of the upcoming tour of the West Indies, will carry out patrolling and guard duties with troops during his 15-day stint with a Territorial Army battalion in the Kashmir Valley.
He will be joining the 106 TA Battalion (Para) on July 31 and will continue until August 15.