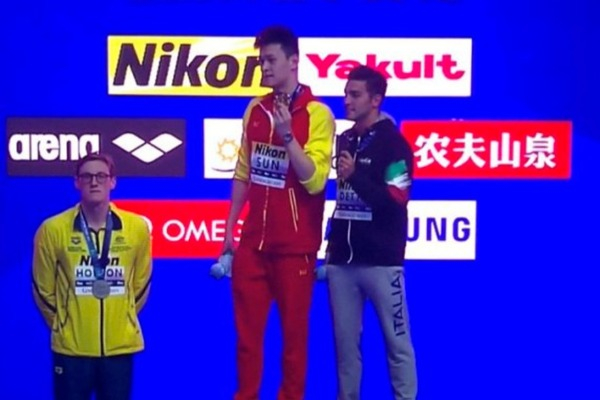 Australian swimmer Mack Horton was slammed as "arrogant" and "rude" by Chinese media as his feud with China's Sun Yang accelerated at the world championships.

After Horton snubbed Sun for a photo-call on the podium, as a doping controversy rages around the Chinese star, the China Daily said the Aussie "humiliated himself with his antics".
"Needless to say such moves are rather rude and lack the most basic manners," it said.
"Not joining Sun on the podium was not a protest, but an insult." Horton was warned by world body FINA for refusing to join Sun on the rostrum after Sunday's 400 metres freestyle medals ceremony, while he also received death threats on Instagram.
The 23-year-old previously clashed with Sun at the 2016 Rio Olympics, where he called him a "drug cheat" before pipping him to 400m gold.
Sun, who served a three-month suspension in 2014, is again under a doping cloud after a leaked FINA doping panel report alleged he smashed vials containing blood samples with a hammer after being tested last year. He has protested his innocence in both cases.
The People's Daily, the official mouthpiece of the ruling Communist Party, accused Horton of "exaggerated and arrogant words and deeds".
"(These) deeds are offensive to the opponent, to FINA, and to rules and morality," it said on Weibo, China's equivalent of Twitter.
CCTV, the state broadcaster, branded Horton "a clown".
The latest spat between Horton and Sun was widely carried in Chinese media, although there was scant mention of the latest doping controversy surrounding the Chinese star.
FINA cleared Sun to take part in the world championships but the World Anti-Doping Agency appealed the decision at the Court of Arbitration for Sport.
The China Daily noted the case against him, but said that Horton and others accusing Sun "should go back to read the statement of FINA, which clearly said that 'Mr. Sun Yang did not commit an anti-doping rule violation'".
Reaction by users of Weibo, China's Twitter-like social media platform, was vitriolic.
"Seriously deal with Horton!" thundered one, while another branded him "scum".