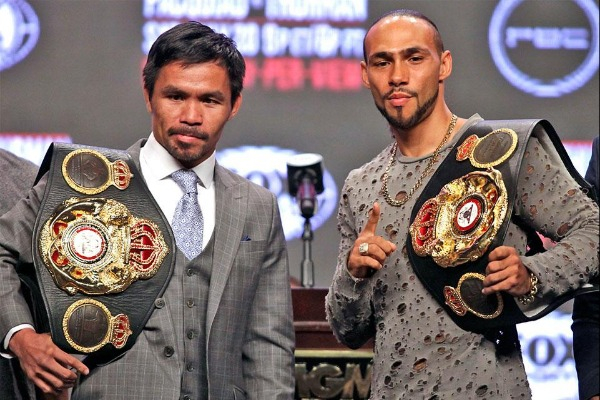 Twenty-four years after first climbing into a professional boxing ring, Manny Pacquiao will attempt to defy the march of time here Saturday when he battles undefeated American Keith Thurman for the WBA welterweight crown.

The 40-year-old Filipino icon clashes with Thurman at the MGM Grand in Las Vegas in what is arguably his most challenging assignment since losing to Floyd Mayweather in 2015's money-spinning "Fight of the Century".
Pacquiao, who has managed to successfully juggle a political career in the Philippines while continuing to box at a high level, looked sharp in his last outing in January, a unanimous decision against Adrien Broner.
But the eight-division world champion is facing an altogether higher-calibre opponent in the shape of Thurman, renowned as one of the hardest punchers in the welterweight division with 22 knockouts in 30 fights.
Thurman, who at 30 years old is a full decade younger than Pacquiao, sees Saturday as an attempt to build his legacy, and has bluntly vowed to send the Filipino into retirement.
"This is a once in a lifetime opportunity to destroy a legend," Thurman declared, placing Pacquiao in the boxing pantheon alongside some of the sport's greatest practitioners.
"It's as if I'm fighting Sugar Ray Robinson or Roberto Duran," Thurman said.
"This is Manny Pacquiao. It's a tremendous feeling, and it's going to feel even greater when my hand is raised at the end of the night."
- 'Nothing personal' -
======================
Pacquiao (61-7-2, 39 knockouts) has shrugged off Thurman's blood-curdling pledges of destruction, insisting he harbours no animosity towards the brash American.
"For me nothing is personal," Pacquiao said. "Our job is to fight. He has to prove something, and I have to prove something. It's easy to say things. But it's not so easy to do it in the ring."
Pacquiao's preparations for the fight have followed a familiar routine.
After spending the first part of his training camp in the Philippines, he relocated to Los Angeles to work under the guidance of long-time trainer Freddie Roach at his Wild Card gym in Hollywood.
Roach maintains that Pacquiao has shown no sign of decline during gruelling sparring, and is confident that his speed and mobility will cause problems for the naturally bigger Thurman.
Roach, who expects Thurman to enter the ring at around 160 pounds once he has rehydrated after Friday's weigh-in, is bracing for an early onslaught.
"I feel he's going to try and come for Manny and try to prove that he's the bigger, stronger man," Roach told AFP.
"He will come forward. He's a pretty good puncher but Manny's footwork should keep him out of trouble.
"I would love a collision because Manny will beat him to the punch every time. One guy is fast, one guy is slow. Thurman hits hard but he has no speed at all. I don't see him being able to get close to Manny because of his speed."

- Time to quit? -
=================
Yet Roach acknowledges that for all Pacquiao's impressive form in training, the acid test will come under the bright lights of the MGM Grand's Garden Arena on Saturday. Boxing history is littered with veterans who needed one fight too many to realise they are shot.
"This is true," Roach said.
"Usually it doesn't show up in the gym. It only shows up in the fight. And I'm very aware of that. And if it does show in the fight I'll be the first one to stop the fight if need be."
Roach is nervous that a verbal agreement brokered with Pacquiao several years ago -- namely that when the veteran cornerman believes it is time to retire, he will heed the advice and hang up his gloves -- may no longer be valid.
"There's too many people around him who will tell him I'm full of shit, and he may listen to them," Roach told AFP.
"At one time I'd have said our agreement was pretty solid and he'd listen to me. But today I'm not so sure."
The financial incentives may tempt Pacquiao to keep plugging away regardless of the outcome of Saturday's contest.
This weekend's fight will reportedly add another 20 million to career earnings estimated at 200 million. A lucrative offer to fight Britain's Amir Khan in Saudi Arabia in November is on the table, though Pacquiao's camp deny a contract had been signed.
Pacquiao, who retired in 2016 only to return seven months later, says he will continue fighting as long as his body allows.

"Boxing is my passion," he told AFP. "It's really hard to stop and hang up the gloves when you know that you can still fight.