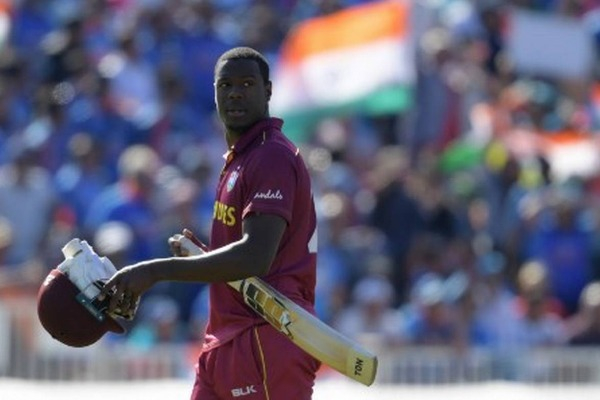 Swashbuckling all-rounder Carlos Brathwaite believes West Indies need to follow in the footsteps of England and rebuild the team over the next four years after failing to make the semi-finals at the ongoing World Cup.

After starting with a bang against Pakistan, West Indies ended their campaign with a 23-run win over minnows Afghanistan to register only their second win in the tournament.
"As a team, we need to regroup. We have some time off, some aching bodies will get time to recuperate and then it's about finding ways and combinations to compete and win series," Brathwaite said.
"Hopefully we can take that winning mentality into the next World Cup. If you look at 2015 and what England did after the World Cup, they have built straight up to the 2019 World Cup and it's paying dividends.
"I don't know off the field what the plans are for the 2023 World Cup but I think it's something we need to look at and build towards that."
West Indies came close to winning against New Zealand when Brathwaite had hit a brilliant century, but fell short by five runs. They also suffered a narrow defeat against Australia.
"There is disappointment in the changing rooms at not making the final four but we're thankful for the good performances," said Brathwaite, who returned with a four-wicket haul at Headingley.
"Sheldon Cottrell had a fantastic tournament and at times like these it's easy to let those things go missing. But as a team we came together, we highlighted the guys that we thought had good performances and the guys that didn't will take the lessons and come back from it so we can start to win bilateral series leading up to the next World Cup."
Meanwhile, Shai Hope, who was adjudged player-of-the-match for his 77 in West Indies' 23-run win on Thursday, said the tournament was definitely a learning experience for his side after registering just two wins from nine games.
"It was definitely a learning experience, something I will never forget. Playing each game in this format you obviously have to be the better team on the day to progress in the tournament," Hope said.
"Regardless of what happens in any team we have to go out there and play cricket."
Hope too agreed with Barthwaite that it is now time for West Indies to rebuild the team for the next World Cup.
"We've got to improve from this experience, I'm sure we are going to use this is as a platform for the next four years so we can have something stronger and build more momentum," he said.
"In a tournament like this you have to play your best game each game. If you muck up you are basically out of the tournament."
Hope, who scored a century in each innings when West Indies defeated England by five wickets in Leeds two years ago, said he loved batting at Headingley.
"Two years ago I had some fun batting and it's just nice to get out and perform again here. I'm not sure what it is, the wicket, the atmosphere. Whatever the case may be, I'm happy to bat here," the wicket-keeper said.