Gambhir lambasts selection panel after Rayudu calls it a day 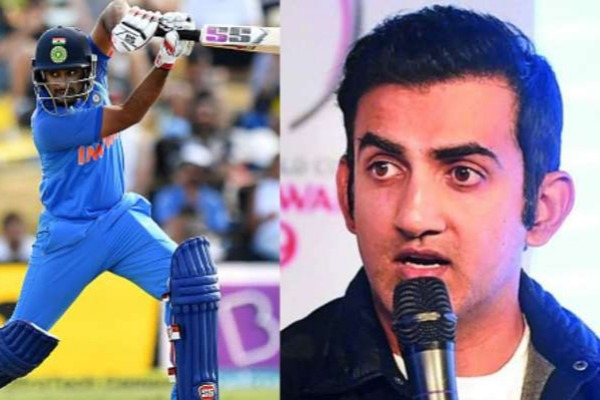 Former India opener Gautam Gambhir Wednesday blasted the MSK Prasad-led senior selection panel after middle-order batsman Ambati Rayudu decided to retire from all forms of cricket, saying the five selectors combined would not have made the runs Rayudu has scored in his career.

Ignored for the ongoing ICC World Cup Rayudu announced his retirement from all forms of the game without specifying his reasons for calling it quits in his email to the Board of Control for Cricket in India.
"According to me, the selectors have been a complete disappointment this World Cup. Rayudu's retirement decision is because of them and their decision-making skills are to be blamed for this," Star Sports expert Gambhir said on Cricket Live.
The 33-year-old was in the official standbys list for the big event in the UK but was ignored despite the injury-forced ouster of all-rounder Vijay Shankar.
Opener Mayank Agrawal was brought in on the team management's insistence and it is learnt that Rayudu was left quite disappointed by the turn of events.
Gambhir, who played 58 Tests and 147 ODIs, minced no words in targeting the selectors by saying the five selectors combined would not have made the runs Rayudu had made in his career.
"Five selectors combined would not have made the runs Rayudu has in his career. I feel extremely sad about this retirement. Rishabh Pant and Mayank Agarwal got selected amidst the World Cup injuries, and anyone in Rayudu's place would have felt equally bad," said Gambhir, who is now a BJP MP.
He termed Rayudu's decision to retire as a sad moment for Indian cricket.
"A cricketer like him that has played so well in the IPL and for the nation, scored three 100's and ten 50's, and despite that if a player has to retire - it is a sad moment for Indian cricket," Gambhir added further.
Rayudu played 55 ODIs for India, scoring 1694 runs at an average of 47.05.
The player, who could never break into the Test team, was in the spotlight before the World Cup.
Declared the preferred No.4 batsman by captain Virat Kohli not many months ago, Rayudu was ignored as Vijay Shankar got the nod in India's final squad for the big event.
Rayudu reacted on his omission with a sarcastic tweet that he would watch the World Cup wearing 3D glasses, in an obvious reference to chief selector Prasad's defence of Vijay Shankar's selection.
Prasad had said that the Tamil Nadu player brings three dimensions to the table - as a middle order batsman who could bowl at medium pace and is also a handy fielder - and that was the reason he got the nod ahead of Rayudu.