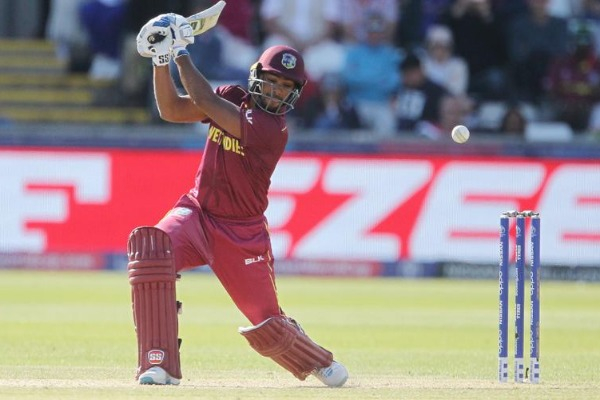 Sri Lanka posted an imposing 338 for six, a total built on Avishka Fernando's first hundred at this level, in a match between two sides whose hopes of qualifying for the semi-finals had already evaporated before a ball was bowled at Chester-le-Street on Monday.
But Pooran, well supported by Fabian Allen (51), got the West Indies close to a target of 339 -- which would have been a new World Cup record for a winning side batting second -- before they lost by 23 runs.
Defeat meant the West Indies have now lost seven matches in a row after starting the tournament with an impressive win over Pakistan.
But Holder took some comfort from 23-year-old left-hander Pooran's century.
"Nicholas played an outstanding innings, he knocked it around as easily as he possibly could," said Holder as he reflected on Pooran's 118 off 103 balls, including 11 fours and four sixes.
"What he has produced is what we expect him to produce, we want him to get better and improve," the all-rounder added.
"We selected him for a reason and gave him full backing to go and play the game he wants to play.
"Yes he will make mistakes as a young player but it is important for development to take place.
"We will look after Nicholas the best we possibly can, I expect big things.
"He has got the talent, ability to change gears, he can improvise, has every shot in the locker and it is just a matter of him putting it together more often."
For the West Indies, the winners of the first two World Cups back in 1975 and 1979, it was yet another case of what might have been after they squandered chances to beat reigning champions Australia and then saw Carlos Brathwaite fall just short of what would have been a match-winning six against New Zealand.
"It is disappointing to come so close on a number of stages and not get that win," said Holder.
The West Indies end their involvement at this World Cup against Afghanistan, still searching for their first win of the tournament, on Thursday.
"We have shown some fight this entire campaign," said Holder.
"I'm proud of certain individuals who definitely put their hands up and put their hearts on the line.