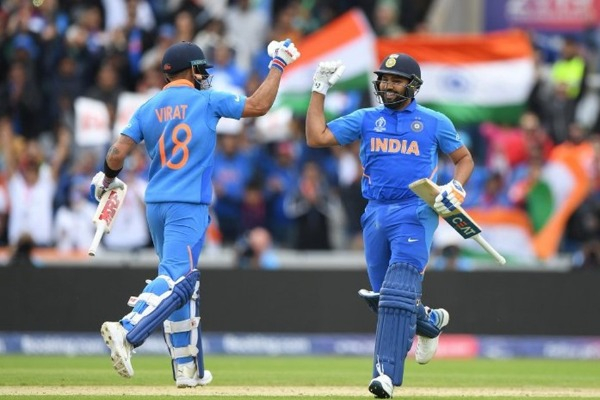 Rohit Sharma pulverised a pedestrian Pakistan attack with a stylish hundred to lead India to a challenging 336 for five in a marquee World Cup encounter here Sunday.

Despite heavy rains and overcast conditions during past few days, the pitch had very little moisture and turned out to be a batting beauty which Rohit and the other Indian batsmen exploited to the fullest.
The Indian vice-captain scored his 24th ODI hundred - 140 off 113 balls while KL Rahul (57) played the perfect second fiddle in an opening partnership of 137 runs.
Skipper Virat Kohli switched gears effortlessly during his 77 off 65 balls and also became the quickest to 11,000 ODI runs, eclipsing a 17-year record held by iconic Sachin Tendulkar.
Mohammed Amir (3/47) pitched the ball up and maintained discipline despite a couple of official 'warnings' for running onto the pitch while Wahab Riaz (1/71) and Hasan Ali (1/84) bowled short consistently.
Courtesy Amir, Pakistan did make a comeback in the final few overs as India managed only 38 runs in the final five overs. Vijay Shankar (15 off 15 balls) struggled with his timing, failing to read Amir's cutters.
The strategy to field two spinners -- Imad Wasim (0/49) and leg-spinner Shadab Khan (0/61) -- didn't work for Pakistan. Their veteran part-timers Shoab Malik and Mohammed Hafeez bowled one over each.
Pakistan bowlers bowled full length balls, which worked to Rohit's strength as he played two shots pull and cut during his innings that had 14 boundaries and three sixes.
Unlike the Champions Trophy final, the Indians were positive from the start. Rahul pulled Amir for a boundary and then Rohit creamed off runs from Hasan Ali.
Rohit also treated the fans with some deft late cuts, back cuts and upper cuts and the occasional slog over deep mid-wicket.
When Riaz came to bowl, he erred both in line and length as his strategy to pepper the Indian batsmen with short pitch stuff backfired. He lost rhythm after getting a warning for stepping onto the dangerous area' and had to come round the wicket.
The only time he looked good was when he bowled full slower delivery to Rahul, who lobbed it to the cover fielder.
Hardik Pandya scored 26 off 19 balls during his hit and miss effort while Mahendra Singh Dhoni edged one off Amir behind the stumps after which rain stopped proceedings.