No breathing space, pressure will be from first second in this World Cup: Kohli 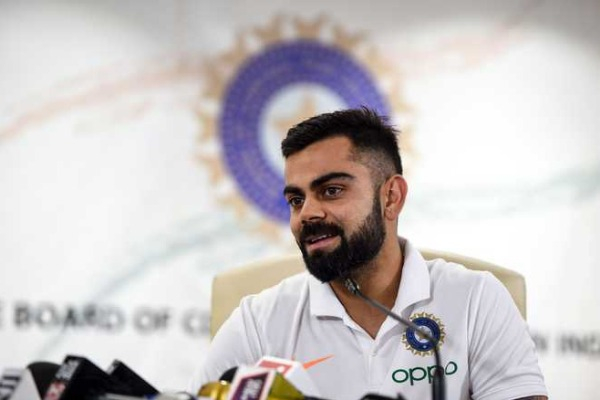 High quality rivals competing in a Round Robin format has made the upcoming World Cup the "most challenging" for India skipper Virat Kohli, who says maintaining intensity from the first ball will be key to his side's fortunes in the showpiece event, starting May 30.

Kohli, who has competed in two World Cups before, said they do not have much breathing space because they have four tough games upfront and in a way it should help them.
For the first time since the 1992 edition, all teams will play each other once to decide the semifinalists. After opening their campaign South Africa on June 5, India will take on Australia (June 9), New Zealand (June 13) and Pakistan (June 16).
"Personally, it will probably be the most challenging World Cup I have been part of because of the format and also the strength of all the teams. If you look at Afghanistan from 2015 to now, they are a completely different side," said Kohli at the pre-departure press conference here.
"Any team can upset anyone. That is one thing we have in mind. Focus will be on to play the best cricket that we can. You have to play to the best of your potential in every game because it is not a group stage situation."
"Playing everyone once is great for all the teams in my view. It is going to be a different challenge and every team will have to adapt quickly to," added Kohli.
Talking about his side's first four games, Kohli said, "That sets the tone nicely for us. Everyone will have to be at their best and maintain intensity from the first match onwards. You don't have any room for complacency and that is why it is the World Cup and the most important tournament.
"We expect that kind of pressure from the first second we step on the field. We are not going to let ourselves think that 'first week onwards we will get into it'. You have to arrive on the day match ready with hundred percent match intensity and start building from there. This is the challenge.
"If you look at all the top clubs in football they maintain their intensity for three-four months whether in Premier League or La Liga. So why not? If we get on a roll and we maintain our consistency we should be able to do it for the length of the tournament."
The recent series between Pakistan and England saw 300-plus scores being the norm but Kohli said things could change in the quadrennial tournament.
"As I said the pitches are going to be very good. It is summer and the conditions are going to be nice. We expect high scoring games but a bilateral series can't be compared to a Word Cup, it is very different.
"So we might also see 260-270 kind of games and teams defending it because of the pressure factor. We expect all kinds of scenarios in the World Cup."
More than the conditions, his team will have to come out on top in high-pressure situations, said the skipper.
"It is always good to go to any place in advance. You are right, it does (help) getting rid of the nerves you might have as a side going into the World Cup. White ball cricket in England, playing an ICC event, the conditions are not that difficult compared to Tests. Handling the most pressure is the most important thing in World Cup and not necessarily the conditions."
Kohli said his highly-rated bowling line-up is ready for the challenge.
"All the bowlers in the squad, even in the IPL, they were preparing themselves for 50-over cricket. You saw all the guys bowling, no one looked tired after bowling four overs. They were very fresh. The ultimate goal at the back of their mind was always to be fit for the 50-over format and not necessarily let the fitness come down and that was communicated to them before the IPL started."
Kohli himself learnt a lot as captain in the IPL where RCB lost their first six games under his leadership.
"We literally came to a point where we said to each other that 'this has not happened to anyone before'. So I realised that after a certain stage things are not in your control so you have to accept that and work things accordingly.
"Most important thing I learnt is that even you are in a situation where it is a must-win game, you can't think in your room the day before 'what if you don't, what might happen or not'. You just have to arrive on that day and play to the best of your potential.