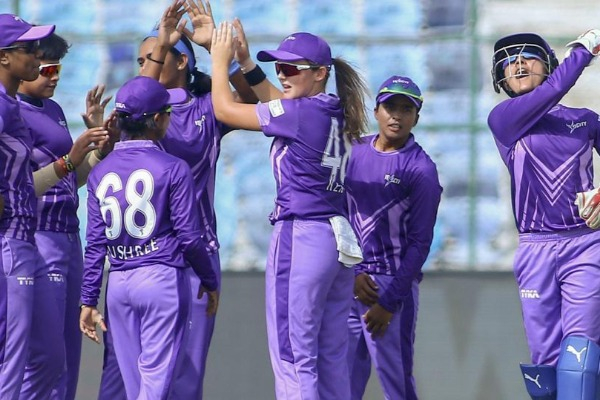 Mithali Raj's Velocity overcame some anxious moments late in the innings before registering a three-wicket win over Trailblazers to keep the race to final in the inaugural Women's T20 Challenge alive, here Wednesday.

After their five-wicket win over Supernovas in the tournament-opener on Tuesday, a victory over Velocity would have sealed Trailblazers' place in Saturday's summit clash.
But it was not to be as Velocity first restricted Trailblazers to 112 for six after opting to bowl and then chased down the target with 12 balls to spare to keep the tournament alive for all the three teams.
In the final league match on Thursday, Velocity will play Supernovas and the outcome of that game will decide the finalists.
Opting to field, left-arm spinner Ekta Bisht (2/13) and New Zealand's Amelia Kerr (2/21) shared four wickets between them to keep Trailblazers under check from the word go.
Harleen Deol top-scored for Trailblazers with 43, while opener Suzie Bates made 26. Skipper Smriti Mandhana made a run-a-ball 10 while Deepti Sharma scored 16 off 16 deliveries towards the end to take Trailblazers past the 110-run mark.
Later, after the early dismissal of Hayley Matthews, Shafali Verma (34 off 31; 5x4s, 1x6) and Danielle Wyatt (46 off 35; 5x4s, 2x6s) accelerated the scoring for Velocity to set the platform for an easy chase.
After the dismissals of Verma and Wyatt, Mithali (17 off 22) looked set to finish off the chase before Velocity lost four quick wickets -- three in the 18th over bowled by Deepti Sharma -- with just two runs needed for victory.
While Veda Krishnamurthy was run out for a first-ball duck, Deepti cleaned up the experienced Mithali with a yorker with the first ball of the 18th over before going through the defence of Shikha Pandey a ball later.
Off the fifth ball of the same over, Deepti claimed her fourth scalp of the day when she bowled Kerr to raise hopes of an improbable win for her side, but it was not to be.
Off-spinner Deepti (4/14) was the wrecker-in-chief for Trailblazers. She was ably supported by Rajeshwari Gayakwad (1/28) and Harleen (1/19).
By virtue of this win, Velocity are on top of the standings just ahead of Trailblazers with Supernovas yet to open their account.