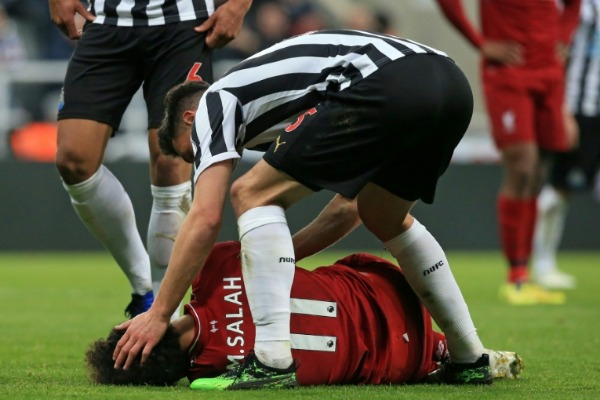 Liverpool's Mohamed Salah was stretchered off with a head knock during the 3-2 win at Newcastle on Saturday leaving manager Jurgen Klopp sweating on the Egyptian's fitness ahead of Tuesday's Champions League clash with Barcelona.

And Klopp will definitely be without another of his prolific attacking trident with Roberto Firmino ruled out due to a groin injury.
Liverpool face a monumental task to overturn a 3-0 first leg deficit against Barca if they are to reach the Champions League final for the second consecutive season.
Salah was caught by Newcastle goalkeeper Martin Dubravka as they challenged for an aerial ball 20 minutes from time at St. James' Park.
"We'll have to see. He took a blow to the head. He watched the game in the locker room, he was OK, but we have to do more tests," Klopp told Sky Sports.
Firmino was not involved on Saturday and Klopp confirmed he will miss Barca's visit.
"He will not be ready for Tuesday and the rest we will see," said the German on the possibility Firmino could be fit for Liverpool's final league game of the season against Wolves on May 12.
Salah had earlier scored his 26th goal of the season to put Liverpool 2-1 in front, before Salomon Rondon levelled early in the second-half to make it 2-2.
Divock Origi then headed Liverpool's late winner as the Reds went back to the top of the Premier League.