Warner and Bairstow leaving will be a huge loss to SRH: Williamson 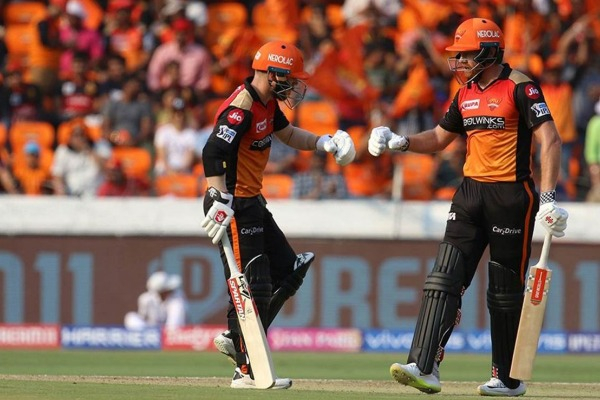 David Warner and Jonny Bairstow have been primarily guiding Sunrisers Hyderabad to victories in the ongoing IPL and captain Kane Williamson says the departure of the two openers will be a huge loss to the side.

With the ODI World Cup scheduled to start on May 30 in UK, the two prolific batsmen will be leaving the IPL mid-way owing to national duty.
"Without a doubt Warner and Bairstow will be big losses, they are world class players. We knew at the start of the tournament that we will lose them at the back end of the tournament and new guys will come in then," Williamson said.
Warner and Bairstow are currently sitting at the first and second spots respectively in the leading run-scorers' list in the IPL, and their formidable partnership at the top of the order has been the biggest reason behind Sunrisers' five wins this season so far.
Warner, the top-scorer this season with 517 runs at an average of 73.85 and a staggering strike rate of 148.56 from nine games including six half-centuries and a ton, will depart for Australia by the end of April.
Bairstow, who is at second position with 445 runs, including a century, from the same number of matches at a strike rate of 158.36, will leave for England after tomorrow's match against Chennai Super Kings in Chennai.
"The two at the top have been doing it all season, hopefully they can continue, they were outstanding. It's been an absolute pleasure to watch the two at the top hit the ball like that," Williamson said after Sunrisers Hyderabad beat Kolkata Knight Riders by nine wickets on Sunday.
Warner and Bairstow shared a 131-run stand, bludgeoning KKR bowlers all over the park.