I was a little shocked after not being picked for Australia series: Karthik 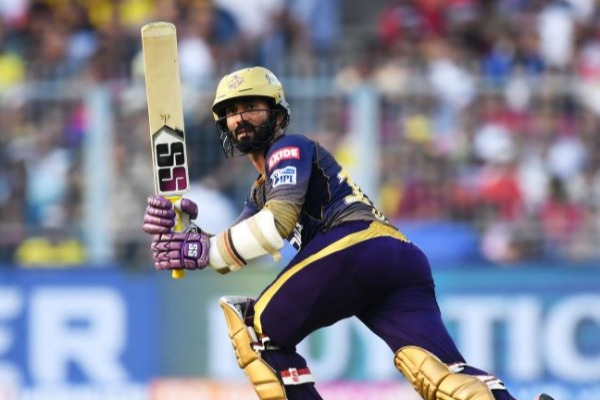 Wicketkeeper-batsman Dinesh Karthik Tuesday said he remained confident about his selection in India's World Cup squad despite being dropped for the ODIs against Australia, attributing his inclusion to consistent performances over the past two years.

In an otherwise predictable squad, Karthik's selection over the young Rishabh Pant became the talking point after the team was announced on Monday. Chief selector MSK Prasad said the more experienced Karthik was preferred over Pant because of his better wicket-keeping skills.
Now that the squad selection is over and done with, Karthik is a happy man and for the next one month, remains focused on captaining KKR in the IPL.
"I am very happy now but there is a tournament (IPL) to play. I would be lying if I say I was thinking about the selection too much. It was only on the morning of selection I was thinking about it. Being a leader of the team (KKR), I have been trying to help everybody and focus on the job at hand."
It had seemed Pant was ahead in the race considering that the 21-year-old was picked for the ODIs against Australia, the last series for India before the World Cup. Karthik, who had done a decent job in Australia and New Zealand, was a bit shocked at not being picked for that home series but remained optimistic, having done "the best that he could" over the past two years.
"I was a little shocked after not being picked for the Australia series but I had I faith that you know if it is meant to be it is meant to be. Some things are not in your control and it is better if you don't think about them. I stayed in best shape cricketing wise in that period."
The selectors did not speak to him before announcing the squad for the Australia series but Karthik said the five wise men had made things clear long ago.
"There was no interaction with the selectors just before team (for Australia ODIs) was announced. But much before that they made it clear that they wanted to give me ample opportunities and also to the others who were competing for the same spot. That was communicated well in advance and we were all aware of it," said the 33-year-old, who has made the World Cup team for the first time since 2007.
While KKR coach and South African great Jacques Kallis backed Karthik to make the World Cup squad, the likes of Ricky Ponting and Sourav Ganguly threw their weight behind their star player Pant, who plays for Delhi Capitals in the IPL.
Since the IPL performances were not considered, Karthik said he could only get into the team on the basis of his performances for India.
"Honestly, between Australia series and now, I have not played any international cricket. It is what I have done over the past two years that has helped me get into the team.
"Between Australia series and getting selected for World Cup there has been nothing but a few IPL games. So I don't think I have done anything in this last one moth to help my selection."
Having sealed a World Cup berth after facing stiff competition, Karthik feels for the deserving ones who missed out.
"The Indian cricket team is in such a strong place right now that there will always be handful of cricketers who will be disappointed after missing out.
"We have so much talent, I don't how to even put it. It is a period where so many players are competing for the same spot but you know when you can only pick a squad of 15, there will always be people disappointed.
"Everybody who has been part of the Indian set up knew this was going to happen when the team will be announced. Some will be happy and some will be not. Credit to Indian cricket for having so many cricketers to choose from," he added.