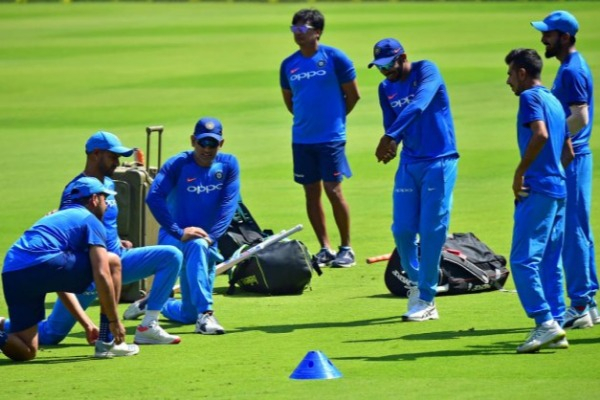 The debate will centre around the second wicketkeeper, number four slot and the need for an additional pacer when the selectors meet to pick one of India's most predictable World Cup squads ever in Mumbai on Monday.

At the end of the home series against Australia, skipper Virat Kohli had indicated that only one slot was up for grabs, as the core had been set for the past one year.
With 14 members all but decided for the marquee event in England starting May 30, the discussion on combination is likely to take precedence over any out-of-the-box name or a left-field selection.
Young Rishabh Pant's competition for the second keeper's slot with veteran Dinesh Karthik will be the highlight of the discussion.
Pant, who has so far scored 222 runs in the IPL compared to a mere 93 by Karthik, looks favourite on paper as his inclusion comes with certain advantages.
He can bat at any slot between Nos 1 and 7, is a left-hander, who can be a designated finisher plus the second keeper.
Pant's keeping skills against spinners has room for improvement but even Karthik hasn't done anything in the last 12 months to make a strong case for himself.
Their franchise coaches Ricky Ponting (Delhi Capitals) and Jacques Kallis (Kolkata Knight Riders), though, have thrown their weight behind their respective stars.
However, with K L Rahul (335 runs in the ongoing IPL) back in the mix as the third opener and regularly keeping for Kings XI Punjab, the selectors might be tempted to use him as the second keeper, apart from third opener.
"The second keeper only comes into play if MS Dhoni is injured. Rishabh is a phenomenal talent but he has not done anything exceptional in ODIs. Can he hit consistently in 50 overs is the question. But he is in mix," a former India player, privy to selection patterns, told PTI.
In case Rahul is made the second keeper, it might just open the doors for Ambati Rayudu as the specialist No. 4 batsman.
Rayudu was a certainty till November when Kohli and Ravi Shastri had identified him as their No 4 but the Hyderabad batsman's adventurous decision to quit long form domestic cricket and poor technique against fast bowling has left him thoroughly exposed.
With Shreyas Iyer (221) not given any chance during the season, Rayudu might get lucky if the idea of a specialist second keeper is done away with.
In case the team management considers all-rounder Vijay Shankar as their No. 4 at the start of the tournament, then it would be curtains for Rayudu.
The final bone of contention could be the fourth specialist seamer considering that the English weather could be very fickle, especially in places like Birmingham, Leeds and Manchester.
"As of now the team is looking at Vijay Shankar and Hardik Pandya as the combined fourth seamer. Ravindra Jadeja with his all round skills and big hitting prowess is a necessity. Plus in dry conditions, he will be a restrictive option," the source said.
But what could pose a problem is India's fourth specialist pacer Umesh Yadav's inconsistency.
Khaleel Ahmed is a left-arm option but he has not shown enough maturity in tesg times.
Ishant Sharma, for his past record in England, a tearaway quick like Navdeep Saini or may be even a good Powerplay bowler like Deepak Chahar could all be inspirational choices which this selection committee may or may not indulge in.
"This selection committee has been pretty consistent with their policies and I don't think they have any reasons to deviate. Don't expect left field selections like Amay Khurasiya (1999) or Dinesh Mongia (2003). But you never know," he added.
Potential squad:
Certainties: (14)
Virat Kohli (captain), Rohit Sharma (vice-captain), Shikhar Dhawan, KL Rahul, Mahendra Singh Dhoni (wk), Kedar Jadhav, Hardik Pandya, Vijay Shankar, Kuldeep Yadav, Yuzvendra Chahal, Jasprit Bumrah, Bhuvneshwar Kumar, Mohammed Shami, Ravindra Jadeja
15th member (options)
If 2nd keeper: Dinesh Karthik/Rishabh Pant
If specialist No 4: Ambati Rayudu
If 4th pacer: Umesh Yadav/Khaleel Ahmed/Ishant Sharma/Navdeep Saini.