Sanction unlikely for Ravi, Nandan as only 11 Indian umpires for IPL posting 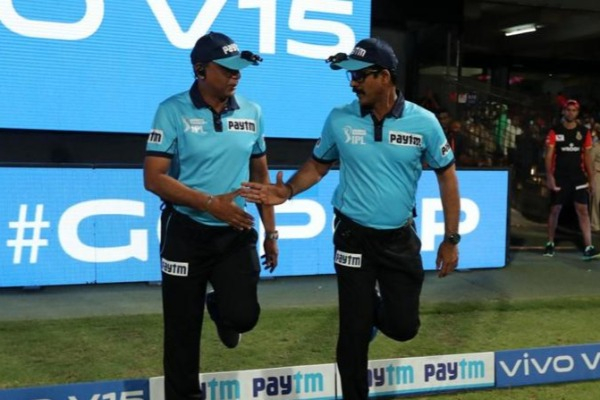 Umpire Sundaram Ravi, whose no ball howler cost Royal Challengers Bangalore heavily in an IPL match and led to an angry outburst by RCB skipper Virat Kohli, is unlikely to be sanctioned due to lack of officials with international experience on the BCCI roster.

Currently there are only 11 Indian Umpires allotted for on-field and TV duty for 56 IPL games, which means Ravi might get negative marking from the match referee but BCCI can hardly take any corrective measures beyond that.
"Currently we have only 17 umpires assigned on-field and for third umpires' duty. Out of them 11 are Indian and six foreigners from the Elite Panel. Apart from them, we have six more Indians as fourth umpires," a member of the now defunct Umpiring sub-committee, who is privy to allocation of assignments, told PTI on Friday.
Ravi, the only Indian in the ICC's Elite Panel, failed to spot an obvious no ball from Mumbai Indians' Lasith Malinga as RCB lost by six runs under controversial circumstances.
A livid RCB captain Virat Kohli said that "umpires should have kept their eyes open" while his India team deputy Rohit Sharma was also critical of the other on-field umpire C Nandan.
Ironically, Nandan was adjudged best Indian umpire in the BCCI awards two years ago.
There is speculation in the BCCI that Ravi and Nandan may not be used in the play-off games of IPL but it's a very preliminary thought since overseas umpires like Marais Erasmus, Chris Gaffaney are around.
The BCCI brass, along with the Committee of Administrators (COA), has long been worried about the declining standard of Indian Umpires but has not been able to come up with a feasible solution.
"Even in those 11, we have only five who are assigned international matches. Apart from Ravi, we have Nandan, Shamshuddin, Anil Chaudhary and Nitin Menon, who are in ICC's international panel. The other six are currently officiating in domestic games," he said.
"Match referee Manu Nayar has no option but to mention the errors by Ravi and Nandan in his report but you can't just off-load Ravi. Let's accept, the replacements will be worse. So penalising him is out of question," he added.
One of the core issues that BCCI has been unable to address is the qualifying structure through which umpires are coming up the ranks.
As per data accessed by PTI, there were about 114 umpires who had officiated in around 2000 BCCI games of all age groups (Men and Women).
This year's Ranji Trophy had been marred by umpiring howlers and fatigue was a reason cited by many for the bloopers.
The most notable was Cheteshwar Pujara being ruled not out during the Ranji Trophy semi-final between Saurashtra and Karanataka. R Vinay Kumar had induced a big nick that the umpire couldn't hear and the India international scored a hundred which proved decisive.
The number is very less and more so because those appearing for BCCI's Level 1, 2 or 3 umpiring Test have been found to be well below par.
"We have the National Academy of Umpires (NAU) in Nagpur. To procure a form and get enrolled there, you need a recommendation from local state association. The system itself is flawed," a retired former first-class umpire, who didn't wish to come on record, said.
It has been learnt that BCCI also intends to clamp down on some umpiring academies, where candidates are allegedly prepared for the BCCI level tests, which gives them direct advantage over other meritorious candidates.