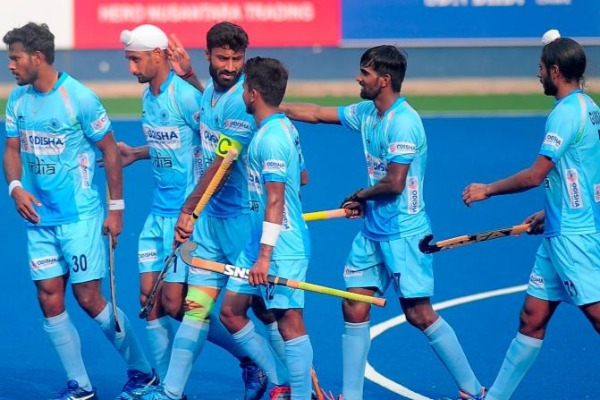 Already assured of a place in Saturday's summit clash against Korea, the Indians scored goals almost at will, leaving the Polish players in daze.
Besides Mandeep (50th, 51st minutes), dragflciker Varun Kumar (18th, 25th) also struck twice while Vivek Sagar Prasad (1st), Sumit Kumar (7th), Surender Kumar (19th), Simranjeet Singh (29th), Nilankanta Sharma (36th) and Amit Rohitdas (55th) were the other goal-scorers for India.
Five-time champions India, thus, maintained their unbeaten streak in the tournament, collecting 13 points from five league matches with the help of four wins and a draw.
With two strikes on Friday, Mandeep became the highest goal-scorer in the tournament with a total of seven goals while Varun took his personal tally to five goals so far.
It was expected to be a one-sided contest and it turned out to be so as India raced to a 2-0 lead by the seventh minute through Vivek and Sumit's goals.
The second quarter saw India strengthen their attack as they made space inside the striking circle. In good form, Sumit earned a penalty corner for India which was perfectly converted by Varun.
A minute later, Surender registered his name in the score sheet by scoring from a penalty corner created by Rohidas.
Though India lost forward Shilanand Lakra to a green card in the 24th minute, they secured another penalty corner and Varun was bang on target with a powerful flick to hand his side a commanding 5-0 lead.
Simranjeet then added to the team's tally when he worked with Mandeep after receiving a beautiful assist from Nilakanta Sharma to put the ball past Polish goalkeeper Mateusz Popiolkowski.
With a formidable 6-0 lead at half-time, India continued to dominate after the change of ends.
In the 36th minute, it was Nilakanta's turn to score after receiving a good pass from Sumit.
Though India managed only one goal in the third quarter, the team made a strong finish in the fourth quarter and scored three more goals.
The Polish goalkeeper, meanwhile, was impressive as he made some brilliant saves to keep Gursahibjit Singh and Simranjeet Singh at bay early in the fourth quarter.
A powerfully struck penalty corner by Rohidas too was well-saved by Popiolkowski.
India's eighth and ninth goal came off skilful displays by Mandeep. His first goal was scored after he intercepted Michal Raciniewski to take a direct shot on goal, while his second was well-assisted by Gurinder Singh.
India's 10th goal was scored after Surender earned a penalty corner with Amit making a good conversion.