Of Ashwin, Buttler and the spirit of 'Mankading' 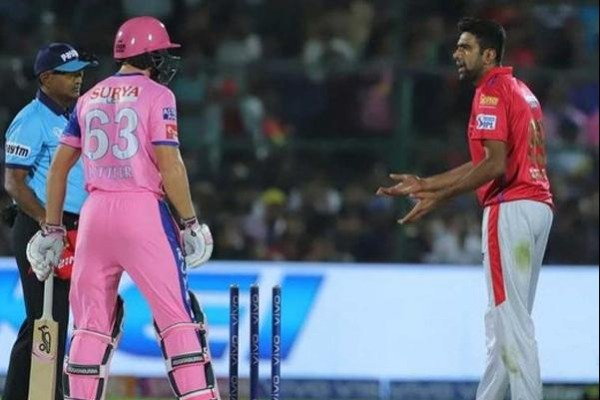 Jos Buttler has now been 'Mankaded' twice in his senior competitive career while Ravichandran Ashwin has hit the 'Bull's Eye' in his second attempt after an aborted one seven years back.

The two protagonists in the latest episode of 'Mankading and the ensuing Spirit of Cricket debate', have been there and done that.
On February 21, 2012 during a Commonwealth Bank series game against Sri Lanka in Brisbane, Ashwin had 'Mankaded' non-striker Lahiru Thirimanne for backing up too far.
However, seniormost player Sachin Tendulkar was seen having a word with stand-in captain Virender Sehwag, who then withdrew the appeal against Thirimanne.
Ashwin was a junior player back then but believed that he was well within his rights to dismiss Thirimanne but seniors in the team thought otherwise.
That his stand has remained the same was evident on Monday night when he 'Mankaded' Buttler at a critical stage of a high-stakes IPL encounter.
As far as Buttler is concerned, he also has not deviated from his stand that a bowler should warn a non-striker batsman before running him out on delivery stride, something that is not there in current rules.
And Sachithra Senanayeke, an out-of-favour Sri Lankan off-spinner did warn Buttler on June 3, 2014 during an ODI at the Edgbaston ground before 'Mankading' him.
England's then captain Alastair Cook and coach Peter Moores had criticised Sri Lanka for not adhering to the 'spirit of the game' while Angelo Mathews had backed his player.

The 'spirit of cricket' has always been a grey area when it comes to 'Mankading'. Kapil Dev was lambasted after carrying out the act against Peter Kirsten in an ODI at Port Elizabeth on December 3, 1992.
Kapil had warned Kirsten senior (elder step brother of former India coach Gary) before whipping the bails at the non-striker's end after loading up.
A furious Kirsten left the field and it didn't go down well with then skipper Kepler Wessels.
Just after the incident, while taking the second run, Wessels dangled his bat in such a manner that it hit Kapil on his shin bone and he looked in pain.
With no match referees in those days, Wessels went scot-free despite TV replays. Those were the days when Doordarshan used to borrow feed from the host country's broadcaster and the matter was never taken up officially.
However, one player, who might empathise with Ashwin is former India and Railways left-arm spinner Murali Kartik, who had not once but twice 'Mankaded' batsmen in domestic matches.
Once, playing for Surrey, during the 2012 English county season, he had 'Mankaded' Somerset batsman Alex Barrow, which led to him being booed by the home spectators at the Taunton ground.
The very next year, December 2013, things turned ugly when Kartik, during a Ranji match, dismissed Bengal batsman Sandipan Das in a similar fashion having warned him earlier.
An irate Bengal team, led by their senior pacer Ashok Dinda, hurled the choicest of abuses at him and even refused to shake hands at the end of the game.
During the same month, Bengal and Railways met again in the quarterfinals at the Eden Gardens and Kartik was booed time and again.
But 32 years ago, during a 1987 World Cup game in Lahore, great West Indies fast bowler Courtney Walsh thrice warned No.11 batsman Saleem Jaffer, who was constantly backing up too far.
However, Walsh didn't run him out and it allowed Abdul Qadir to hit a six and win the game for Pakistan.
Walsh was then presented with a special medal by erstwhile Pakistan Zia ul Haq for showing 'sportsman spirit'.
The debate continues as some like legendary Sunil Gavaskar find it disgusting that one of India's most iconic cricketer Vinoo Mankad's is attached to this controversil dismissal. Mankad was the first to do it back in 1947 during a tour of Australia.
"It was Bill Brown who got out, so why is it called Mankading and not Browned," Gavaskar has time and again stated.
Certainly, the debate not going to end very soon.