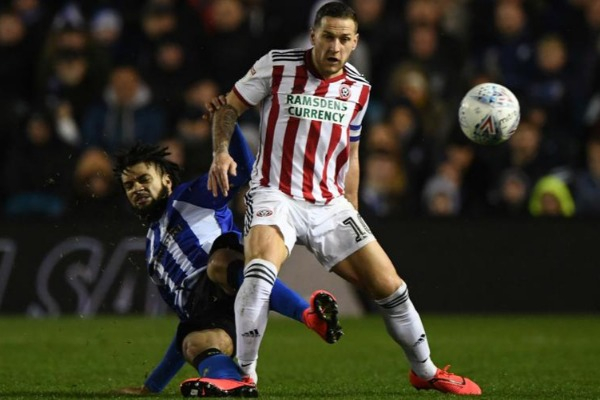 Sheffield United lost ground in the race for promotion to the Premier League after they were held to a goalless draw by Sheffield Wednesday in the Steel City derby at Hillsborough on Monday.The result saw the Blades fail to regain a place among the top two of the Championship following wins by leaders Norwich and second-placed Leeds.

The result saw the Blades fail to regain a place among the top two of the Championship following wins by leaders Norwich and second-placed Leeds.
Instead, Sheffield United were left in third place, two points behind fellow Yorkshire club Leeds.
Only the top two sides at the end of the regular season are guaranteed places in English football's lucrative top flight next term, with the third and final promotion place decided by a series of play-off matches involving the teams finishing in third to sixth places.
This draw saw Wednesday extend their unbeaten run in the league to eight matches and left the home side six points adrift of a play-off spot, with the Owls now 15 points above the bottom three and relegation looking an increasingly unlikely prospect.
There was a worrying start to Monday's match when the Blades' Jack O'Connell had objects thrown at him from the crowd while taking a throw-in.
It was the visitors who created the only clear chance of a dull first half, when Gary Madine got on the end of a cross from Oliver Norwood only for the former Wednesday striker's back-post effort to be well-saved by Keiren Westwood.
Madine also saw appeals for a penalty when coming into contact with Michael Hector after 15 minutes turned down.
Wednesday's lack of threat up front led manager Steve Bruce to bring on George Boyd for Fernando Forestieri at half-time.
The experienced boss, who began his managerial career with Sheffield United, having played under Alex Ferguson at Manchester United, nearly had his decision vindicated at the start of the second half.
But from Boyd's cross, Steven Fletcher sent an overhead kick onto the crossbar.
At the other end, Norwood was off-target with a 20-yard shot. Wednesday had the best chance to win the game in the 65th minute when an excellent cross from Rolando Aarons found the unmarked Sam Hutchinson eight yards out only for the midfielder to shoot straight at goalkeeper Dean Henderson.
The Blades pressed for a goal late on, several set-pieces causing chaos in the Wednesday defence without any of them leading to a clear chance.