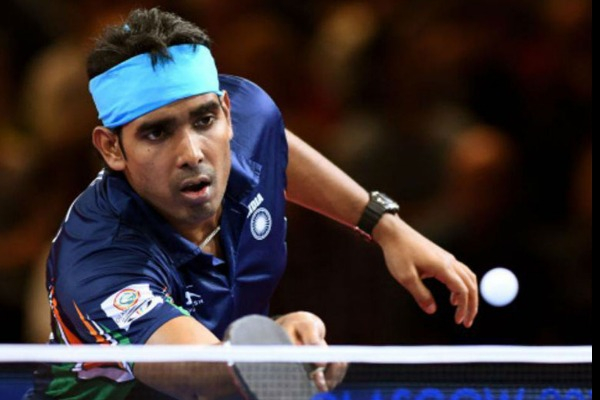 Ace paddler Sharath Kamal, who is currently ranked 33 in the world, on Thursday said he aimed to burst into the top 20 in 2019 and the next big thing on his mind was the 2020 Tokyo Olympics.

The 36-year-old player also believes that the two table tennis bronze medals which India won at last year's Asian Games held in Indonesia have given them the confidence that a medal at the 2020 Olympics was a possibility.
"Personally, for myself in 2019, the goal would be to get into top 20 in the world ranking and 2020 Olympic Games is the next big thing," Kamal told reporters here in the presence of former national champion Kamlesh Mehta.
"The major thing in the plan is the Tokyo Olympic Games 2020, especially after winning medals at the Asian Games - we have won two bronze medals in 60 years. Those medals gives us a lot of belief that even at the Olympics it is a possibility (to win medals).
"Because in the Asian Games the competition is very high and more or less they are the recurring teams at the Olympics, apart from a few European nations. If we can win a medal at the Asian Games, a medal at the Olympic Games is not a shot too far," explained Kamal who has won the national men's singles title a record nine times.
Kamal had guided the men's team to a historic bronze at the Asian Games with a shock win over Japan, ending a 60-year wait for a medal in table tennis.
Sharath and rising star Manika Batra also clinched a surprise bronze in mixed doubles to cap off a dream run at the Asian Games, raising hopes of even an Olympic medal.
According to the Chennai-born paddler, preparations have begun for the Tokyo Games.
"We have started our preparations. We have a road map.
We have had training programmes and tournament schedules. At this moment we have chosen a lot of tournaments, but in the end we will narrow it down as we start playing," he said.
"So, beginning of 2020 will be the first qualifiers for the Olympics. Then in April and May, so there are lots of qualifiers coming up. We need to be ready for them," he added.
Kamal feels the current ecosystem is conducive for the players, which was not the case before.
"Back then when I played my first World Championship, we were 29th in the World and now we are 10th in the World. So we have come a long way.
"The bodies supporting the game -- Table Tennis Federation of India, 11Sports, all of them -- have created a good ecosystem around the players, so we can do well at international events. I think that's the biggest change.
"Earlier if you saw, the players did not come out from the system but more from their natural skill and that is the reason we had a select few who were doing well. Like in Kamlesh Sir's time, he was the only one in the top 100.
"Then Chetan Baboor was the only one there and even in my time, I was the only one there. But now we are coming in as a bunch. That's because the system is clearly producing the results. If we can continue to have these kinds of support, we will be in the best five or probably the best in the world," he stressed.
Kamal said it was Baboor who had advised his father to take him to Europe before noting that the scenario has changed now with there being enough good players here itself.
"Well even before me Chetan Baboor had gone (to Europe). He was the one who told me, rather my father, that if I wanted to do well I need to go to Europe. The main reason to go to Europe was there are lot of players on a good level and there is league system, where every week you play a lot of matches.
"It's a consistent programme for 6-8 months where you are in good practice and you have good matches. I think that thing has changed in recent years. That is not the only way to improve now because India has a big pool of players who are doing well. The necessity to go to Europe has reduced," he explained.