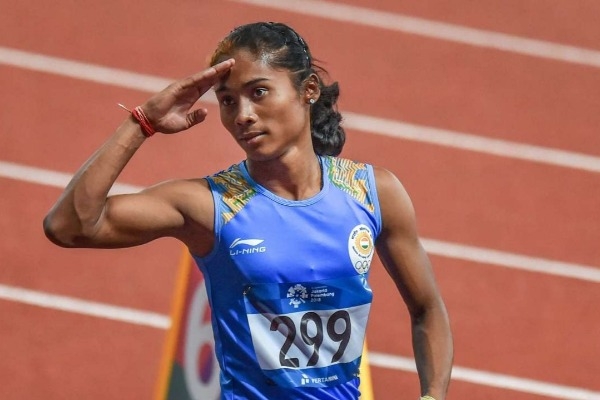 India's newest sprint sensation Hima Das Tuesday said she didn't expect to be nominated for the Arjuna award this year, despite her stunning season in international athletics.

The 18-year-old from Assam was among the 20 sportspersons recommended for the Arjuna Award, which is subject to approval by Sports Minister Rajyavardhan Singh Rathore.
"I didn't expect to win the Arjuna this year. I was thinking may be next year, I will be considered," said Hima, who clinched the gold medal at the U-20 World Championship in Finland, on the sidelines of a promotional event organised by Adidas.
Hima was today made the brand ambassador of the sports manufacturing giant.
Nicknamed the "Dhing Express", Hima has been a sensation this year as she added three medals -- a gold and two silvers from the 18th Asian Games -- to her World Championship gold.
The star sprinter won gold in Women's 4 400m and silver medals in mixed 4x400m and 400m individual event.
Asked when she will start training, Hima said: "The season is over now. Next year, there is South Asian Games, Asian Championship and World Championship, so how to approach the different events and how to prepare I will do it during training."
Asked which race she holds close to her heart, Hima said: "The Finland (World Junior Championship) race remains one of my favourites and also the semifinal at Asian Games when it had started raining."
Hima had produced her personal best timing of 50.79 secs to win silver at the 400m race.
"There are few targets in my mind. I will do that one by one. People expects a lot for me now and I will achieve that. I scored 50.79 at Asian Games, so even 50.78 is a step ahead," she said.
"I thrive in competition, it feels good to improve timings and create records."
Asked about the contribution of India's foreign coach Galina Petrova Bukharina, Hima said: "She is very supportive. She herself is an Olympian and sometimes we also don't realise her methods and later we come to know why we did a particular training. So we always come prepared everyday for the challenge that she will throw at us."
Asked if she will participate at the National Open Athletics Championships to be held in Bhubaneswar, Odisha on September 25.
"At this moment, I haven't decided if I will participate in the open Nationals. Lets see," said Hima, who had withdrawn from IAAF Continental Cup which was held on September 8 and 9.
Hima had crashed into a team hug with the Japanese team after she jogged over them, following the Indian women team's 4x400 relay gold.
"After we got the gold medal, they (Japan team) said hi to me and then they came to hug me, so I also hugged them."
Hima gets the crowd involved exuding confidence ahead of her races.
She said: "I don't show tension and nervousness but I know how fast my heartbeat races before a race."
She was given a rousing welcome by her home state after returning from the Asian Games.
"I don't get emotional too often but yes it felt good to get such a welcome ," she said.