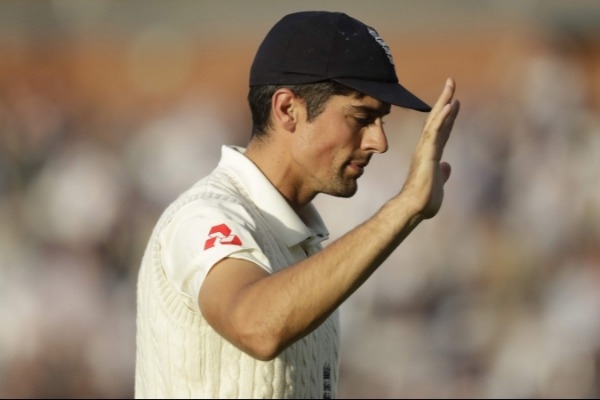 Legend has it that Sir Don Bradman was teary-eyed when he was beaten by Eric Hollies' googly in his final Test match at the Oval in 1948.

However, just over 70 years later at the same ground, Alastair Cook showed no such emotions as he scored another workmanlike hundred, his 33rd and final one in Test cricket, against India.
Interestingly, his debut hundred was also against India, at Nagpur in 2006.
Not many have scored a hundred on their debut and farewell Test and Cook joined the elite club which also has Greg Chappell and Mohammed Azharuddin.
He is only the fifth such cricketer with the other two being Bill Ponsford and Reginald Duff.
While Chappell's was an official retirement, in case of Azhar, the Test match against South Africa was his 99th and last one as he was never picked again due to match-fixing allegations.
Purists equate left-handed batsmen with grace but Cook was a paradox with his effective batting that was devoid of elegance.
David Gower's cover drive remains a stuff of legends but Cook has been a working class hero as John Lenon would have put it.
If the ball is on his pads, he would just whip it and deliveries with width would be ferociously cut.
However, it will be difficult to remember Cook's shots even though the impact of his innings has always been felt if one looked at the larger picture.
"He is totally committed to England and he deserved a sweet send-off," said Sunil Gavaskar, who scored one century more than the former England captain.
Cook's daughters were present and the applause was generous as the Oval gave him a standing ovation.
But it never felt like an event taking place in an amphitheatre like it happened with Sachin Tendulkar at the Wankhede.
The celebrations were as minimal as it they have been for his eighth, 17th or 23rd century. Happy and matter of fact.
After all, he had a job at hand. To frustrate the Indian attack no end and kill the match as a contest.
Rahul Dravid's team tasted it first in 2006, Mahendra Singh Dhoni's men suffered in 2011, 12 and 14 and now it was the turn of Virat Kohli's band to meet the same fate in 2018, albeit the last time.
Cook said that he had "nothing left in the tank" but what he didn't say was that there was a last ounce present and it was meant for the 'Three Lions'.
There was no place for any over-riding emotions and he was as focussed against Ishant Sharma's angular deliveries on third evening as he was against rookie Hanuma Vihari's off-breaks at the stroke of lunch Monday.
In the end, he has given it his all and even ensured that Mick Jagger donates 20,000 pounds for charity as he had promised if someone scored a century or took five wickets.