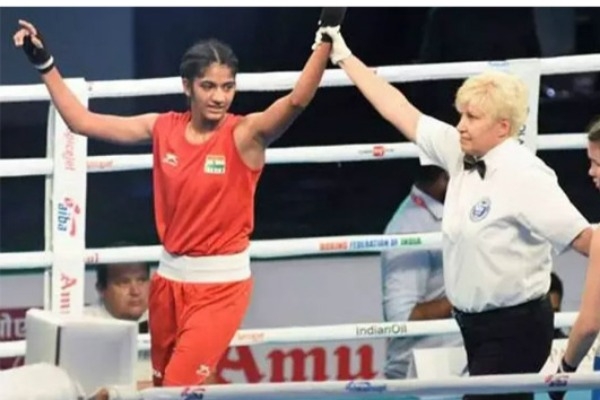 The Haryana-boxer, who is also an Asian champion, defeated Thailand's Nillada Meekoon in a split decision on the first day of summit clashes in which she was the only Indian in action here.
She had won her previous world championship gold last year when the event was held in Guwahati.
Also in the finals are Asian champion Manisha (64kg), Anamika (51kg) and Sakshi (57kg) but they will be in action tomorrow.
It was a gruelling slugfest that Nitu had to pull through against Meekoon, who made the bout slightly messy with her defensive tactics that involved considerable holding.
The Indian, however, kept her composure and came up with straight and clean blows to fetch a favourable verdict from the judges.
Tomorrow, Manisha will be up against England's Gemma Paige Richardson, while Anamika will square off against Destiny Garcia of the USA.
Sakshi will face Croatia's Nikolina Cacic in her final bout.
Earlier, Jony (60kg) and Astha Pahwa (75kg) joined Asian medallists Bhavesh Kattimani (52kg) and Ankit Khatana (60kg) and Neha Yadav (+81kg) and Sakshi Gaidhani (81kg) in settling for bronze medals after semifinal losses.
The Indian women's team had claimed seven medals in the previous edition of the event and has surpassed that number this time.