People stopped believing in us but we didn't: Kohli 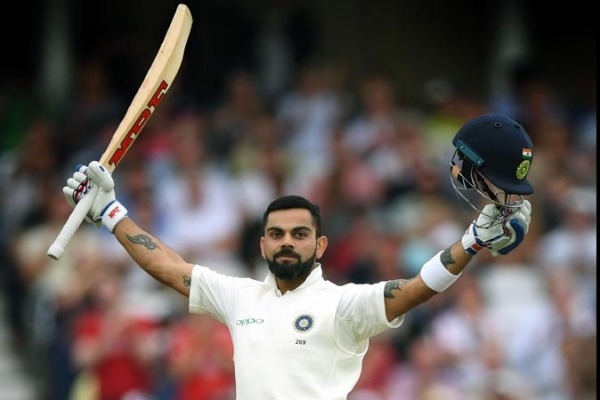 Indian captain Virat Kohli today said that his team never stopped believing in their abilities even though a lot of people had given up on them after back-to-back defeat against England in the first two Test matches.

The comprehensive 203-run win in the third Test kept India alive in the five-match series and Kohli was effusive in his praise of his players for believing in themselves.
"We were down 0-2 in the series and a lot of people have stopped believing in us. But we believed in ourselves and that is why it is 1-2 now after 0-2. All that matter was what we thought inside the change room. Anything on the outside did not really matter. We believe we can win the series," Kohli said at the post-match presentation ceremony.
"The victory was much-needed in the context of this series. We have been clinical in all departments and its is a victory for the entire dressing room. A complete Test win for us," Kohli said.
Asked if he had exorcised the ghosts of his batting failure in 2014, he said, "I haven't thought about the 2014 failures, but I am happy to have contributed to my team's cause."
As he does often these days, he once again dedicated his good show to his wife Bollywood actor Anushka Sharma.
"I'd like to dedicate my innings to my wife who is here and keeps motivating me. She's copped a lot in the past but she deserves the credit for this one. She kept pushing me and she's the one who keeps me positive out there," said Kohli who has scored two centuries along with 440 runs so far.
Kohli said his bowlers have been making a mark in the series so far and once the batsmen stepped up, it was a matter of time that his team start stamping its domination.
"There was no panic in the team and we were outplayed in only one Test out of the five we had played since South Africa, and that was at Lord's. We dominated in this game because we put runs on the board and then the bowlers did well. They (bowlers) were waiting and ready, even Ashwin did well with his injury.
"The bowling was ready to take 20 wickets again and the question was what we could do as batsmen to give them that cushion. I am glad that the batsmen stepped up. We spoke about stepping up as batsmen, and that's what we did, and we set it up for the bowlers. When both skills come together with slip catching, we win Test matches. Everything came together for us," the visiting captain said.
Asked about the crucial moments of the match, Kohli said, "The partnership between me and Ajinkya (Rahane) was crucial. Ajinkya was clear in his mindset in the first innings, and when he goes out and plays like that, he is attractive to watch and he can change the complexion of the game.
"It was about getting stuck and not throwing our wickets away. England have a quality attack and you need grit and determination to score against them, and Ajinkya did that in the first innings and Pujara in the second."
Asked how suddenly has India produced quality fast bowlers, he said:"The most pleasing thing for me to see was that the four fastest bowlers in the series have all been Indians. We've worked on our fitness, on our mind set, cutting down on loose deliveries. They're getting better and better the more Test cricket they've played. It's a delight to watch when they're running in."
England captain Joe Root gave credit to India for the way the visiting team played in the match.
"We just have to give the credit to India. They left very well, and it was hard for the seamers to get wickets early on, so credit to India. We very much under performed in the first innings. I don't think there are any regrets for me about the team selection. It's a strong team that we have."
"In the second innings, the partnership between Buttler and Stokes was admirable and a lesson in how to play Test cricket. It's not about being defensive, but how well they adapted to the situation and built partnership. We have to look at that, and adapt our games individually in Southampton and give ourselves a good chance to score 400 plus so we can put some scoreboard pressure."
Root said his team will have to look for ways to stop Kohli from scoring runs.
"You're always looking to find a way to get people out (on Kohli), and it's not like he has got quick runs against us so we have bowled well, but he's got a way to adapt to these conditions and he's found a good method to play in these conditions.
"We have to find ways to deal with him. We have experienced bowlers, who can work him out."
On wicketkeeper Jonny Bairstow's injury status, he said, "It's early days for the Bairstow injury, and over the next few days we will have a better idea about the swelling. It would be great if he manages to recover and I know he'll be desperate to play.