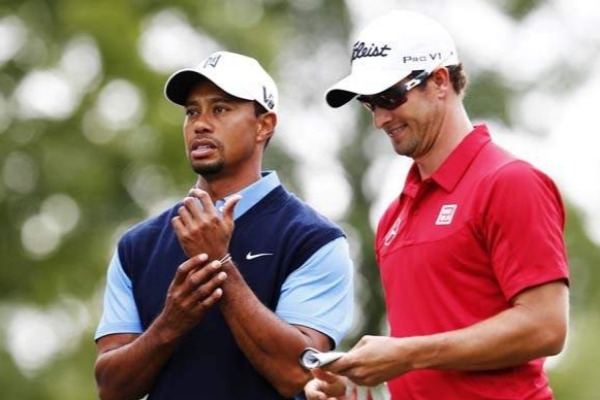 The 28-year-old two-time US Open champion sealed his third major title by firing a four-under-par 66 to finish 72 holes on 16-under 264, edging Woods by two strokes at Bellerive Country Club with Australia's Scott another shot adrift.

"To do this is truly incredible," Koepka said.

As Woods electrified spectators by displaying the form that made him a 14-time major champion, American rival Koepka stayed calm and persevered under intense pressure to claim the Wanamaker Trophy and a top prize of 1.98 million (1.73 million euros).

"I heard all the roars when Tiger made his run," Koepka said. "It was fun. It made it enjoyable.

"It's my focus. For some reason the majors get my attention. When you're firing at flags you have to be calm and focus on every shot." Deadlocked for the lead with Scott -- who began the back nine with three birdies in four holes -- and only one stroke ahead of Woods, Koepka sank a 10-foot birdie putt at the par-4 15th and a six-foot birdie putt at the par-3 16th then parred the last two holes to secure the victory.

"I missed putts on 14 and 15 and Brooks didn't and my momentum was gone," Scott said. "I'm definitely playing better and in the right direction and that's a positive."

Woods, who hasn't won a major title since the 2008 US Open and hasn't won any title in five years, proved he is a legitimate major title contender once again at age 42 with an epic 64 which he concluded with a 20-foot birdie putt at 18, the crowd roaring as he walked off.

"These fans were so positive all week," Woods said. "I can't thank them enough for what they were saying out there and what it meant to me coming back trying to win a major championship again." - 'Mind-blowing' -

Koepka, who defended his US Open crown in June at Shinnecock, became only the fifth player to win the US Open and PGA Championship in the same year, joining Woods, Jack Nicklaus, Gene Sarazen and Ben Hogan.

And it came in a season where he missed the Masters with a left wrist injury.

"Going from that to even being able to play this year to this, it's absolutely mind blowing," Koepka said.

In his eighth month of a comeback season after spinal fusion surgery and years of back injuries, Woods grinded out four birdies against a lone bogey on both the front and back nines but could never draw level with Koepka, settling for his seventh career major runner-up finish.

"I played hard," Woods said. "Bit of a struggle with my game. I was hanging in there, grinding it out trying to make as many birdies as possible." Crowds cheered the veteran through a thrilling round that saw him miss every front-nine fairway but take only 10 putts, scrambling from dirt, trees and bunkers to stay in the hunt.

"It was a struggle until I found a little bit of something on the back nine," Woods said. "I was hanging in there with my mind and it got me through." Woods, who said he wants to be chosen as a captain's pick for the US Ryder Cup team, was pleased he was able to contend at the PGA and lead in the last round of last month's British Open.

"I would never have forseen that a year ago," Woods said.

The impact was dramatic for rivals as well.

"The roars were pretty unbelievable," second-ranked 2017 PGA winner Justin Thomas said. "Any birdie he made everyone went nuts. This was the first real Tiger effect I've experienced with that many people." Scott, the 2013 Masters champion, missed a short birdie putt at the par-5 17th and made bogey 18 to finish third but was pleased with his overall effort.

"I was feeling really good out there, especially as he back nine got going," Scott said. "I didn't play the last two holes very well.