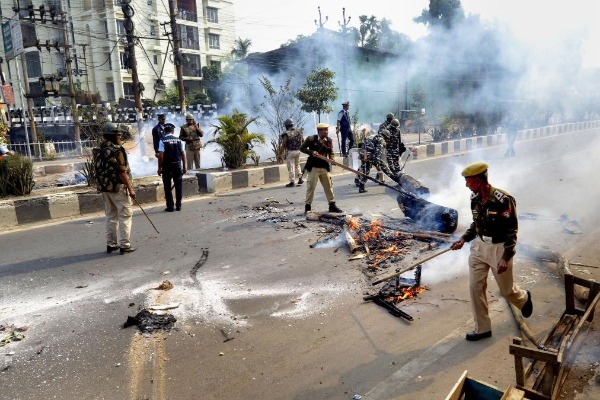 Thousands of people defied curfew in Guwahati on Thursday and took to the streets, prompting police to open fire, even as protests against the contentious Citizenship (Amendment) Bill intensified in Assam.

Police said they had to open fire in Lalung Gaon area in Guwahati after stones were hurled by protestors. The agitators claimed that at least four persons were injured in the shooting.
Police also had to fire in the air in several other areas of the city, including the Guwahati-Shillong Road which turned into a war zone as protestors vandalised shops and buildings, burnt tyres and clashed with security forces.
Students' body AASU and peasants' organisation KMSS called for a mega gathering at Latashil playground in the city, which was attended by hundreds of people.
Notwithstanding the restrictions, several prominent personalities from the film and music industry, including icon Zueen Garg, joined the gathering along with college and university students.
"Prime Minister Narendra Modi and Chief Minister Sarbananda Sonowal have betrayed the people of Assam by ensuring passage of the Bill," AASU advisor Samujjal Bhattacharya said at the meet.
Leaders of the AASU and the North East Students' Organization (NESO) said they will observe December 12 as 'Black Day' every year in protest against the passage of the Bill in Parliament.
Kamrup district witnessed an absolute shutdown with offices, schools and colleges closed for the day. Shops were also shut, with no transport plying as all major roads, including the NH 31, being blocked.
Police said they had to fire three rounds in the air in Rangia town as protestors threw stones and burnt tyres.
Agitators were also baton-charged at several places in the town.
Police also fired in the air in Golaghat district to disperse protesters who blocked the NH 39, officials said.
Tea garden workers stopped work in Lakhimpur and Charaideo districts and also at Numaligarh in Golaghat district and some areas in Tinsukia district.
All educational institutions across the state are closed.
Five columns of the Army have been deployed in different parts of the state and are conducting flag marches in Guwahati, Tinsukia, Jorhat and Dibrugarh, officials said.
Several flights and trains to and from Assam have also been cancelled.
The Citizenship (Amendment) Bill seeks to provide Indian citizenship to non-Muslim refugees coming from Pakistan, Bangladesh and Afghanistan after facing religious persecution there.