PM Modi is Pakistan's poster boy, not us: Rahul 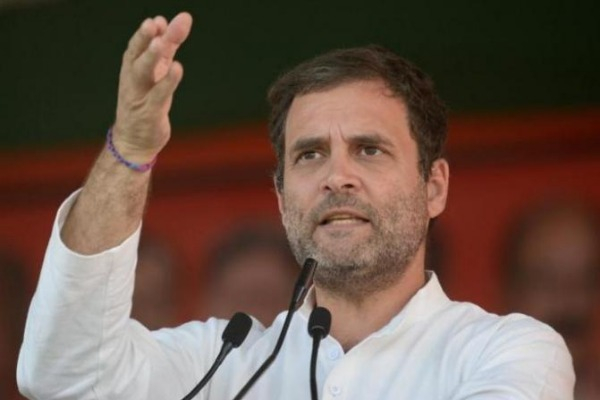 Gandhi's remarks came after Modi on Tuesday called the opposition as the "poster boys of Pakistan" for seeking proof of the Indian Air Force's (IAF) action on a terror camp in Balakot in Pakistan.
"He is the Pakistan's poster boy, not us," said Gandhi, hitting back at Modi for having publicly hugged Sharif during his swearing-in ceremony and later when he visited Pakistan to wish the leader on his birthday.
The Congress president also attacked the prime minister for inviting the Inter-Services Intelligence (ISI) to India to probe the Pathankot terror attack.
"I do not remember, did we go to Nawaz Sharif? Who came to Pathankot--the ISI. The Prime Minister got the ISI to investigate Pathankot. Prime Minister went to Mr Nawaz Sharif's (family) wedding and we are the poster boys," he said at a press conference.
"He (Modi) is the poster boy of Pakistan, hugging Mr Nawaz Sharif, calling Mr Nawaz Sharif to his swearing-in ceremony. The fact of the matter is that the issue here is corruption in Rafale and it is very clear that prime minister personally got the contract for Anil Ambani and put Rs 30,000 crore in his pocket," Gandhi said.
The BJP has often accused the Congress of aiding Pakistan and 'speaking their language' as it said the statements made by Congress leaders were being used by Pakistan to attack India.
Gandhi added that he has heard the views of the families of CRPF jawans killed in the Pulwama terror attack, who have raised questions on the impact of the air strike in Pakistan, asserting that the Congress leaders have also discussed this.
"I read in the newspaper yesterday that the families of martyred CRPF jawans have raised the demand and their feelings are hurt and want to know what action has been taken in the air strikes. The Congress leaders have discussed that and I do not want to say anymore," he said when asked about certain Congress leaders demanding proof of the air strikes.
On the reported stealing of crucial files related to the Rafale deal and how the Centre was threatening The Hindu newspaper with the Official Secrets Act and whether it was an archaic law, the Congress chief said, "We do not know, that is a technical question and I am sure there are many things that cross the line of secrecy."
He, however, added, "You are being punished because you are brave, that is why you are punished and I am very proud that you have the guts to stand against Mr Narendra Modi.