Cong workers want Priyanka to take on Modi in Varanasi 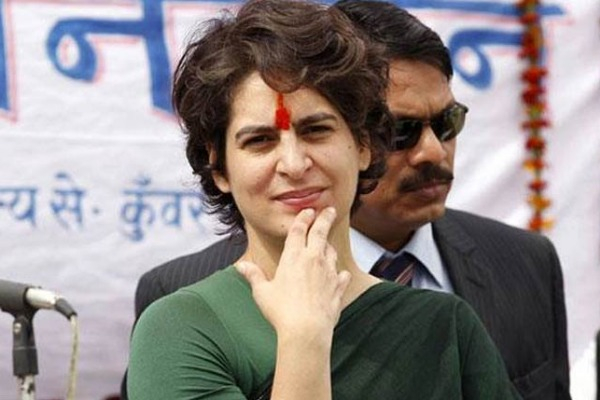 The local unit of the Congress too demanded that Priyanka, who formally entered politics on Wednesday and was appointed the general secretary for Uttar Pradesh East, be pitted directly against Modi to galvanise voters of UP and neighbouring states.
The posters featuring Priyanka Gandhi in the middle, Congress president Rahul Gandhi on the top and local Congress leader Ajay Rai, who had contested against Modi in 2014, at the bottom, have come up across Varanasi.
The lines, "Kashi Ki Janta Kare Pukar, Priyanka Gandhi Ho Sansad Hamar. We want Priyanka", were printed in bold letters in the centre of the posters.
Holding the posters and shouting slogans, some youth Congress workers also took out a march in the Lahurbir locality demanding that Priyanka be declared the party's candidate from Varanasi.
"The Congress party soldiers (workers) are ready to make her (Priyanka) win the elections from the temple town constituency... If she contests from here, the impact would be felt in the neighbouring states as well," Rai said.
"The wave of PM Modi has now faded as people want to get rid of the Modi-Shah misrule who have ruined the lives of scorers of small businessmen and rendered thousands of people jobless due to their faulty policies and chest thumping," he added.
Rai expressed confidence that the Congress would win the 2019 Lok Sabha elections as well as the 2022 assembly polls in Uttar Pradesh.
The country witnessed a negative economic growth during the Bharatiya Janata Party (BJP)-led National Democratic Alliance (NDA) rule, Rai said.
Criticising the the Union government's Pravasi Bharatiya Diwas event being held in Varanasi from January 21 to 23, the Congress leader questioned why the dates of the event were changed.
The event is held to pay respects to father of the nation Mahatma Gandhi, who returned to India from South Africa on January 9. The BJP changed the dates to gain political mileage, he said.