Your next holiday should be to this ghost town in China 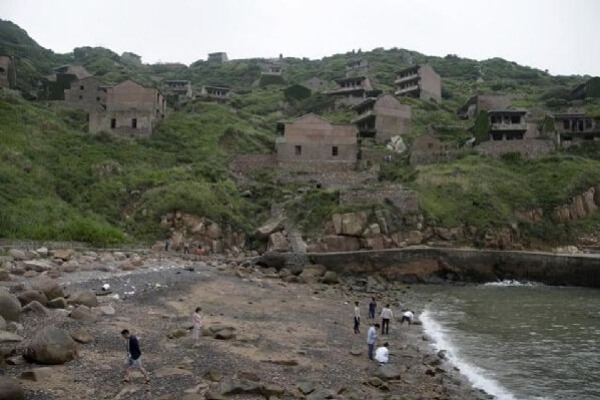 Blanketed with greenery, the ghost town is perched atop cliffs looking west into sea mists obscuring the horizon. Abandoned homes ravaged by weather and creeping vines stand silent but for the surf, the whine of mosquitos, and birdsong. This is Houtouwan — Back Bay in Mandarin — an abandoned fishing village engulfed by nature on the far eastern island of Shengshan, 90km off the coast of Shanghai.

Small groups of tourists on a recent weekend braved muddy footpaths through overgrown lawns to chase foggy photographs and answers to the question: What happened to the village? The story of the Wang family may provide one answer. Wang Yi left the village at the age of 5 when his family moved to the island’s main town to access its better services. When he returns to Houtouwan, the 27-year-old college graduate gathers honeysuckles for a fragrant tea that reminds him of his birthplace. Memories of village festivals draw infectious laughter from his mother Zhu Mandi, who still dreams about her childhood among the mist-shrouded mountains next to the sea.

“I dream of playing here, and it looked like it did when we played here when I was young,” Zhu said, pointing at her former family home. Vines have since wound through the three-story house and ivy has crept through the now broken wooden front door. The island draws tourists from the mainland intrigued by the village’s unique devastation. Ivy cloaks some buildings completely but on many Houtouwan houses, beautiful roof tiles still gleam and broken verandas offer majestic views of the stormy sea. Visitors must take a boat to Shengshan then a taxi up a hill to a cemetery overlooking the village, and then descend down perilous footpaths into the mist and ivy. Huang Dan, a 22-year-old student, was among the visitors on a recent weekend who said she wanted to photograph the beauty of human structures subsumed by roots, rain, vines and wind. “It feels like this place belonged to nature from the very beginning, and the old invaders finally left, and nature finally made it back,” she said.

“Transportation was inconvenient,” he said, making it difficult for teachers to get to Houtouwan from the main town Shengshan. “It was too far away. They arrived in the dark and left in the dark,” he said. Houtouwan is “a microcosm of the entire Chinese society,” said Zhao Yeqin, an associate sociology professor at the East China Normal University in Shanghai. The village reflects a broader migration trend that has seen countless Chinese move from rural areas to urban megacities like Shanghai, Shenzhen and Guangzhou. In Houtouwan’s heyday, Lin Fazhen ran a small store in 1984 catering to fishermen. He sold cigarettes, alcohol, fishing supplies, canned food, biscuits and fruit that he imported on boats from the mainland. “They went to the sea when the boats were sailing, and they came back when it got windy. They played mahjong,” Lin said while taking a drag from a cigarette. When the people left, he began planting cauliflower, cabbage, lettuce, celery and basil. He says he now farms more than 1,300 square meters (a third of an acre) of various plots scattered across abandoned lawns, gardens and terraces. He chuckled when asked if the village was haunted. “People got scared and said ghosts were living here, so it was called ghost village,” Lin said. “I’ve lived in this world for such a long time, and have never met one.”

If You Go:
To reach Houtouwan from Shanghai, take a bus from the Nanpu Bridge bus station or taxi to the Shenjiawan Dock, about 90 minutes’ travel time, and purchase ferry tickets to Shengshan. Weather often gr