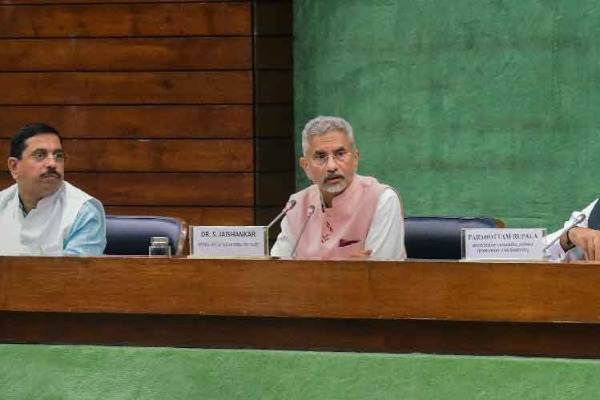 Jaishankar, who made the initial remarks, and Parliamentary Affairs Minister Pralhad Joshi were among the senior members of the government at the briefing, which was also attended by P Chidambaram and Manickam Tagore of the Congress, Nationalist Congress Party's (NCP) Sharad Pawar and T R Baalu and M M Abdulla of the DMK.
"The reason we took the initiative to request you all to join an all-party meeting was...this is a very serious crisis and what we are seeing in Sri Lanka is in many ways an unprecedented situation," Jaishankar said.
"It is a matter which pertains to a very close neighbour and given the near proximity, we naturally worry about the consequences, the spillover it has for us," he added.
Jaishankar also said there have seen some "misinformed comparisons" in the context of Sri Lanka wherein some people have asked whether "can such a situation happen in India".
M Thambidurai (AIADMK), Saugata Ray (Trinamool Congress), Farooq Abdullah (National Conference), Sanjay Singh (Aam Aadmi Party), Keshava Rao (Telangana Rashtra Samithi), Ritesh Pandey (Bahujan Samaj Party), Vijayasai Reddy (YSR Congress) and Vaiko (MDMK) were among those who attended the meeting.
Sri Lanka is facing its worst economic crisis in seven decades, with a severe foreign exchange shortage hampering the import of essentials, including food, fuel and medicines.
The economic crisis has also sparked a political crisis in the island nation after a popular uprising against the government. Acting president Ranil Wickremesinghe has declared a state of emergency in the country.
Political parties from Tamil Nadu such as the DMK and the AIADMK had demanded at an all-party meet before the Parliament's monsoon session began that India should intervene in the crisis shrouding the neighbouring country.