Another hospital, another fire: 13 die in Virar ICU blaze in Maharashtra 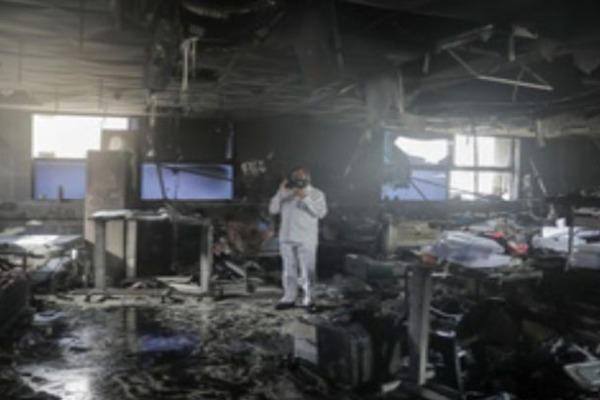 Thirteen COVID-19 patients, including five women, died in a blaze at the intensive care unit of a private hospital in Palghar district of Maharashtra on Friday, police said

There were 90 patients in the hospital, 18 of them in the ICU, when the fire broke out after a blast in the AC unit, an official said.
TV visuals showed the smoke-filled ICU in a disarray after the blaze, with the ceiling falling off in some places, beds and other furniture strewn around and kin of the deceased wailing outside the hospital
The fire broke out in the ICU on the second floor of the four-storeyed Vijay Vallabh Hospital at Virar shortly after 3 am, an official said. Firefighters extinguished the blaze at 5.20 am, he added
There were 18 patients in the ICU when the fire broke out, the official said. Five patients were rescued and shifted to other hospitals in the area, he added
The other patients in the hospital were not affected as the damage was confined to the ICU, he added
Maharashtra Chief Minister Uddhav Thackeray has ordered a probe into the tragedy, Health Minister Rajesh Tope said
Former BJP MP Kirit Somaiya said authorities should check if there was a fire safety audit of the hospital, which is over 50 km from Mumbai
The tragedy comes two days after 22 COVID-19 patients who were either on ventilator or oxygen support, suffocated to death when their oxygen supply stopped suddenly due to a malfunction in the main storage at a civic hospital in Nashik
District Disaster Control Cell chief Vivekanand Kadam told PTI that the Virar hospital fire was preceded by an explosion in the AC unit of the intensive care unit
Relatives of the deceased reached the hospital soon after hearing of the incident and demanded that stringent action be taken against those responsible for the tragedy
Earlier this year, ten infants were killed in a fire that broke out at a special newborn care unit of the Bhandara district hospital in Maharashtra on January 9. Seventeen infants, aged one to three months, were admitted to the ward at the time of the tragedy
A fire also broke out in Mumbai's Dreams Mall, which housed a Covid-designated hospital on its third floor, in the intervening night of March 25-26. The fire, which raged for over 40 hours, claimed nine lives, including those of patients on ventilator support.