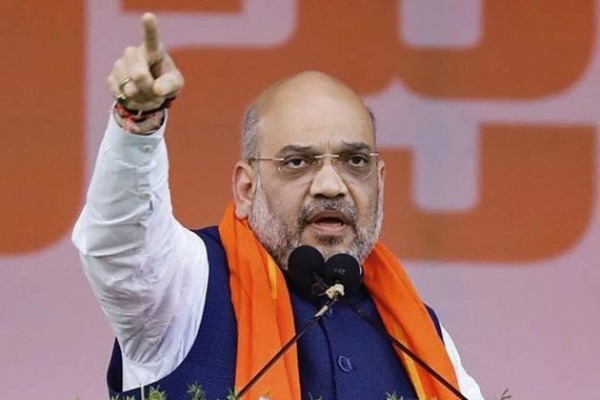 Home Minister Amit Shah said Tuesday the Congress' tie-up with the AIUDF will be a factor in the BJP-led alliance's win in the Assam assembly polls as voters will back the saffron party decisively because its main rival cannot stop the influx of illegal immigrants by joining hands with Badruddin Ajmal, accused by the ruling bloc of protecting infiltrators.

In an interview to PTI, the senior BJP leader also predicted a thumping win for his party in West Bengal, asserting that people there are yearning for a change from the Trinamool Congress' "misrule" and will embrace Prime Minister Narendra Modi's vision for the state's development.
"We will win more than 200 seats in Bengal and improve our tally in Assam," he said.
Asked about the ground for his confidence about the BJP's big victory in the elections to 294-member West Bengal assembly, Shah said the party has only strengthened its position since the 2019 Lok Sabha polls while the TMC's support base has eroded with a large number of its leaders quitting the organisation. Most of them have joined the BJP.
"We won 18 Lok Sabha seats out of the total 42 in 2019 and lost three by small margins. That too when people had doubts about our victory. Now they have confidence that we can win. People are yearning for a change and are with us," he said.
Chief Minister and Trinamool Congress supremo Mamata Banerjee may not want to see Modi and it is her choice, but people of West Bengal have been displaying their affection for him by coming out in huge numbers to see him, he said, referring to large turnouts in the prime minister's rallies.
Asked about Banerjee's charge of religious polarisation against the BJP, Shah said if raising the issues of people amounts to religious polarisation then this is a "new definition" he has heard.
When her government obstructed Durga Puja and Saraswati Puja processions, was it not polarisation, he asked.
"We are making a positive statement that everyone should observe their festivals. We have no objection if someone is observing Ramzan or Christmas. But you cannot impose restrictions on Durga Puja and Saraswati Puja," he said.
Asked about some incidents of the show of disaffection by party workers over the choice of candidates, he said the BJP will win them over and asserted that this will have no impact on its poll prospects.
The BJP is a disciplined and cadre-based party, he said, asserting that people are behind the party.
The saffron party has been running a high-pitched campaign in the state, seeking to end Chief Minister Mamata Banerjee's 10-year-old rule, charging her with running a dispensation tainted with corruption and crime.
On the Assam polls, Shah said its alliance with AIUDF president Ajmal will be a reason for the Congress' downfall.
The Congress has allied with the All India United Democratic Front (AIUDF), which draws its support primarily from Bengali-speaking Muslims and is accused by the BJP of protecting infiltrators, to consolidate anti-BJP votes.
Taking a swipe at Congress leaders Rahul Gandhi and Priyanka Gandhi Vadra, he said they will be left with nothing in either West Bengal or Assam and wondered what kind of a "secular" party it is as it allies with the Indian Union Muslim League (IUML) in Kerala, Ajmal in Assam and Furfura Sharif cleric Abbas Siddiqui in West Bengal.
Asked about Rahul Gandhi's assertion that the Congress will block the contentious Citizenship (Amendment) Act in Assam, Shah shot back saying he should also come clear on whether it will implement National Register of Citizens or not.
"Rahul Gandhi should say what is his policy on the NRC,' he said.
The BJP has asserted it will implement a reworked NRC in Assam to ensure that "genuine" Indians are included and illegal infiltrators, a sensitive issue in the state, are identified.
To a question about the BJP's announcement that it will implement the CAA in West Bengal but the party not raising the issue in Assam, he noted that the TMC government has come out against it, prompting his party to assert its support to the Act in that state.
"The CAA is a law for the country," he noted.
The BJP-led NDA government in the state has worked to rid it of infiltration and terrorism and will now work to resolve its regular flood crisis, he said, expressing confidence that the alliance will improve its tally.
The alliance had won 86 seats in the 126-member assembly in 2016.
"The Congress' alliance with the AIUDF and the development work done by us will be the reasons for our victory," Shah said.
Asserting that the BJP dispensation has established peace in Assam, paving the way for development, he noted that over 5,000 people had died in violence in the Bodo region but the Bodoland agreement brought in by the Modi government has ushered in peace.
Over 2,000 militants have surrendered and joined the mainstream, the home minister said and also cited road network, bridges built over the Brahmputra river and setting-up of central institutions as the government's achievements.
To a question over the Congress wooing tea garden workers who are in large numbers in Assam and West Bengal, he said it is one thing to join them for a "photo-op", a dig at Priyanka Gandhi, and another to appreciate their concerns and work to address them which the state government has done.
Besides raising their wages, the government opened over 7.5 lakh bank accounts for them for the direct transfer of their earnings to them and the Centre has allocated Rs 1,000 crore in the budget for their welfare, Shah said.
He also expressed confidence that the National Democratic Alliance will win the polls in Tamil Nadu. The BJP has tied up with the ruling AIADMK in the state. The saffron party will also improve its performance in Kerala, a state where the CPI(M)- led LDF and the Congress-led UDF are seen as main rivals.
Assembly polls to four states and the union territory of Puducherry will be held between March 27 and April 29. The counting of votes is scheduled for May 2.