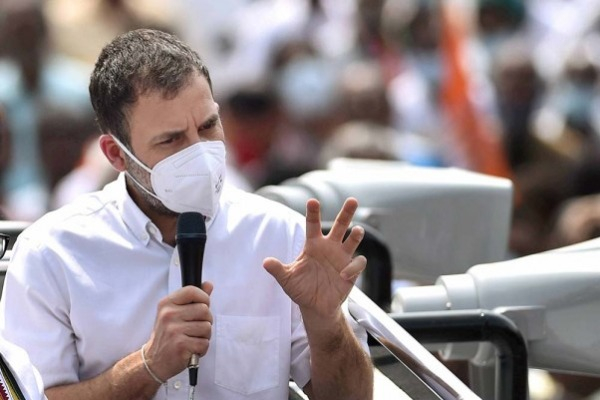 The Congress on Sunday slammed the BJP-led Centre over the arrest of a freelance journalist from the Singhu border with party leader Rahul Gandhi saying those who fear truth arrest honest scribes.

Mandeep Punia was arrested from the Singhu border on Sunday for allegedly misbehaving with the police personnel on duty at the farmers' protest site there, officials said.
A case was registered against him and he has been arrested now, a senior police officer said, a day after the scribe was detained.
Reacting to the development, former Congress chief Rahul Gandhi tweeted in Hindi, "Those who fear truth arrest honest journalists."
He also tagged a video purportedly showing Punia being held by police at the Singhu border.
Congress general secretary Priyanka Gandhi Vadra said journalists covering the farmers' movement are being arrested, cases are being slapped against them and the internet is being shut down in many places.
"The BJP government wants to trample upon the voice of the farmers, but they have forgotten that the more you suppress, the more voices will rise against your atrocities," she said in a tweet in Hindi.
Congress' chief spokesperson Randeep Surjewala, in a tweet in Hindi, addressed PM Modi and said by slapping false cases at the BJP's behest against journalists exposing the attack on farmers and shutting down mobile internet at protest sites, "you will not be able to suppress the farmers' movement and shut out the country's voice".
At a press conference, Congress spokesperson Supriya Shrinate hit out at the government, saying it is the 70th day of the protest by farmers and they have been forced to sit at the borders by an "insensitive, obstinate and stubborn government that itself dug trenches and refused the farmers any entry in Delhi".
"For anybody who tries to show their plight, their pain, this government will go after them -- whether it is people in social life, in political life or journalists. A very young journalist by the name Mandeep Punia was arrested and was presented before the court even before his Defence lawyer could reach," she said, slamming the government over the scribe's arrest.
"We strongly condemn the sedition cases they have filed against our own MP Shashi Tharoor or the kind of sedition cases that have been filed against Mrinal Pande, Rajdeep Sardesai, Vinod Jose, Zafar Agha, Paresh Nath and Anant Nath ," Shrinate said.
Tharoor and the six journalists have been booked by police, including in BJP-ruled states such as Uttar Pradesh and Madhya Pradesh, over their allegedly misleading tweets on the violence during the farmers' tractor rally in Delhi on Republic Day.
The Congress condemns it as these are the people who are trying to show the real face of the farmer, who are trying to bring to light the plight of the farmer and instead of standing with them and letting them do their jobs honestly, this government goes after them, she said.
"I am not surprised that all this began in Uttar Pradesh. It had to begin in UP, because in UP to tell the truth, to open your mouth, to speak the truth will lead you to jail," she said citing action against several journalists.
Instead of going after the perpetrators, the culprits, they actually go after people, who bring truth to light, Shrinate said.
"The Wire has been penalized, Siddharth Varadarajan faces the case as of yesterday because his platform showed what the slain farmer's father had said," she alleged.
Referring to the Red Fort incident, Shrinate said the Congress is extremely upset with what happened on January 26 and the party stands in solidarity with "our forces, we stand in solidarity with the policemen, who have been hurt physically, but we would want to ask who fed them as fodder".
"Are they pawns in a conspiracy that the government tries to stitch, she asked.
"It has been 120 hours, people, who are responsible for demonising our farmers, people, who are responsible for the kind of incidents that we saw at the Red Fort are still at large and at some point the Home Minister will have to be answerable, the government and the prime minister will have to be answerable for all of this," she said.
Democracy is being "weakened" with every passing day and institutions are being "destroyed", Shrinate said.
Thousands of farmers, mostly from Haryana, Punjab and Uttar Pradesh, have been protesting at several border points into Delhi since November-end, demanding repeal of the three agri laws and a legal guarantee to the minimum support system for their crops.
Enacted last September, the three laws have been projected by the Centre as major reforms in the agriculture sector that will remove middlemen and allow farmers to sell their produce anywhere in the country.
However, the protesting farmers have expressed their apprehension that the new laws would pave the way for eliminating the safety cushion of the MSP and do away with the wholesale market system, leaving them at the mercy of big corporates.
Meanwhile, earlier in the day, ahead of Prime Minister Narendra Modi's Mann ki Baat programme, Rahul Gandhi cited a media report to attack the PM, saying in a tweet in Hindi, "Don't be so scared, talk about China.