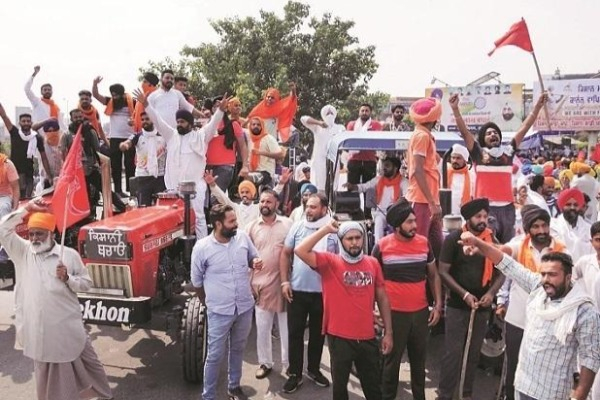 Farmer leaders welcomed the Supreme Court order to stay the implementation of three farm laws on Tuesday, but said they would not call off their protest until the legislations are repealed.

The Sankyukt Kisan Morcha, an umbrella body of around 40 protesting farmer unions, has called a meeting later in the day to decide the next course of action.
The farmer leaders said they are not willing to participate in any proceedings before a committee appointed by the Supreme Court, but a formal decision on this will be taken by the Morcha.
"We welcome the court's order to stay the implementation of the farm laws, but we want a complete repeal of these laws, which is our main demand," Abhimanyu Kohar, a senior leader of the Morcha, told PTI.
Another farmer leader, Harinder Lokhwal, said the protest will continue until the contentious farm laws are repealed.
"We do not have faith in the idea of a committee and we have been saying this since the very beginning, when the government had suggested the formation of a committee. But this time, it is the Supreme Court and we will see the functioning of this committee," All India Kisan Sabha (Punjab) vice-president Lakhbir Singh said.
The Morcha issued a statement on Monday, saying the unions are not willing to participate in any proceedings before a committee that may be appointed by the top court.
The Supreme Court stayed the implementation of the controversial farm laws till further orders on Tuesday and set up a four-member committee to resolve the impasse between the Centre and the farmers' unions protesting at Delhi's borders over the legislations.
The committee will look into the farmers' grievances against the three laws.
"We welcome the Supreme Court's decision, but it is still a stay and not a repeal of the three laws. So we will not move from here until the laws are repealed.
"The agitation will continue. We are against the idea of a committee, but there is a difference between a committee formed by the government and a committee formed by the Supreme Court," Bharatiya Kisan Union (Punjab) senior vice-president Manjeet Singh said.
The four members of the committee set up by the apex court are BKU president Bhupinder Singh Mann, Shetkeri Sangathana, Maharashtra president Anil Ghanwat, Pramod Kumar Joshi, director for South Asia, International Food Policy Research Institute, and agriculture economist Ashok Gulati.
The top court has sought the cooperation of the protesting farmers and made it clear that no power can prevent it from setting up a panel to resolve the impasse over the controversial farm laws.
Thousands of farmers, mostly from Haryana and Punjab, have been protesting at several border points of Delhi since November 28 last year, demanding a repeal of the three laws and a legal guarantee to the minimum support price (MSP) system for their crops.
Enacted in September last year, the three laws have been projected by the Centre as major reforms in the agriculture sector that will remove middlemen and allow farmers to sell their produce anywhere in the country.
However, the protesting farmers have expressed their apprehension that the new laws would pave the way for eliminating the safety cushion of the MSP and do away with the "mandi" (wholesale market) system, leaving them at the mercy of big corporates.