Over 2,000 women likely to join ongoing protest at Singhu border in coming days 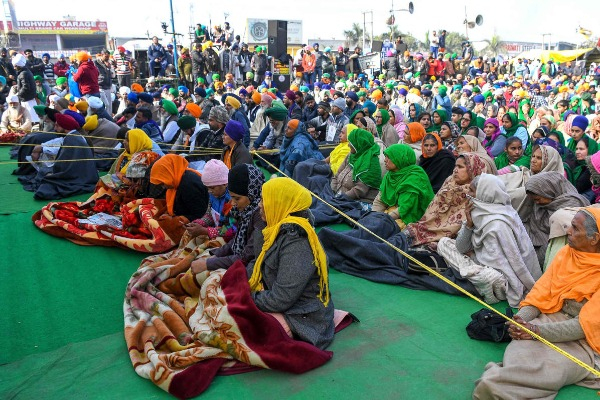 The protest against the Centre's new farm laws looks set to intensify further as more farmers are expected to join the ongoing agitation at Delhi's border points to press for their demands.

Over 2,000 women from the families of those protesting at the Singhu border here are likely to join the demonstration in the coming days.
Farmer leaders said they were making arrangements for the women coming from different parts of Punjab. Tents are being put up, a separate langar is being planned, and extra temporary toilets are being arranged, they added.
With farmers from different states camping at Delhi's Singhu, Tikri and Ghazipur border points for over two weeks to demand a repeal of the farm laws enacted in September, several roads have been closed, and commuters advised to take alternative routes to avoid inconvenience.
Police said Singhu, Auchandi, Piau Maniyari, Sabholi and Mangesh borders were closed, and commuters have been advised to take alternative routes via Lampur, Safiabad and Singhu school toll tax borders while traffic has been diverted from Mukarba and GTK road.
Outer Ring Road, GTK road and NH-44 can be avoided, they said.
The Ghazipur border also remains closed for traffic coming from Ghaziabad to Delhi due to the protest. Commuters have been advised to take other routes via Anand Vihar, DND, Chilla, Apsara and Bhopra borders.
Multi-layered cemented barriers, additional police force and barbed wires formed the first layer of security at the Singhu border protest site.
The second layer of barricades deployed by the Delhi Police is being guarded by a team of Rapid Action Force along with personnel from the paramilitary forces.
Water cannons, trucks, containers and iron barricades have also been deployed.
On Monday, leaders of around 32 farmer unions observed a day-long hunger strike at the Singhu border as part of the protest.
Agitating farmers have expressed apprehension that the new agri marketing laws would pave the way for the dismantling of the minimum support price system, leaving them at the "mercy" of big corporations.
The government has maintained that the new laws will bring farmers better opportunities and usher in new technologies in agriculture.