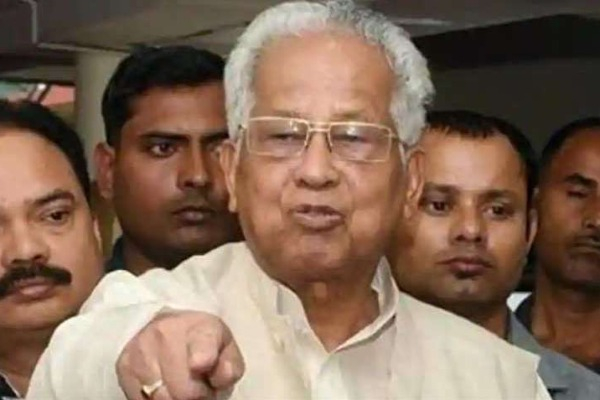 He was 84 and is survived by wife Dolly, daughter Chandrima and son Gaurav, a Lok Sabha member.
Gogoi, thrice chief minister of the state from 2001 to 2016, breathed his last at the Gauhati Medical College and Hospital (GMCH) at 5.34 pm, Sarma said.
The doctors conducted an ECG and found that his heart has stopped, following which the GMCH superintendent confirmed that he is no more, he said.
Kovind said Gogoi's passing away marked the end of an era and his long tenure in office was a period of epochal change in the state.
"Extremely sad to know of the demise of Shri Tarun Gogoi, former Chief Minister of Assam. The country has lost a veteran leader with rich political and administrative experience. His long tenure in office was a period of epochal change in Assam," Kovind tweeted.
He will always be remembered for the development of Assam and especially towards his efforts to improve law and order and fighting insurgency in the state, he said in another tweet.
"His passing away marks the end of an era. In this hour of grief, condolences to his family, friends and supporters," the president said.
Expressing his anguish at the death of Gogoi, Prime Minister Narendra Modi described him as a popular leader and veteran administrator who had years of political experience in Assam as well as at the Centre.
Modi tweeted, "Sri Tarun Gogoi Ji was a popular leader and a veteran administrator, who had years of political experience in Assam as well as the Centre. Anguished by his passing away. My thoughts are with his family and supporters in this hour of sadness. Om Shanti."
The veteran Congress leader was first admitted to the hospital on August 26 after testing positive for COVID-19 and was discharged for a brief period before being admitted again on November 2.
His condition deteriorated on November 21, following multi-organ failure and was put on invasive ventilation.
Gogoi was given dialysis on Sunday. His condition deteriorated further over the past few hours and the hospital where he was admitted said he was "very, very critical".
Gogoi was the MLA from the Titabor assembly constituency since 2001. He was also a six-time parliamentarian and became Union minister twice.
His body will be taken to his residence in Dispur and from there to the Srimanta Sankardeva Kalakshetra where people can pay their homage to the leader on Tuesday, said Sarma, a former cabinet colleague of Gogoi.
He will be cremated with full state honours and the venue will be decided in consultation with his family, the minister added.