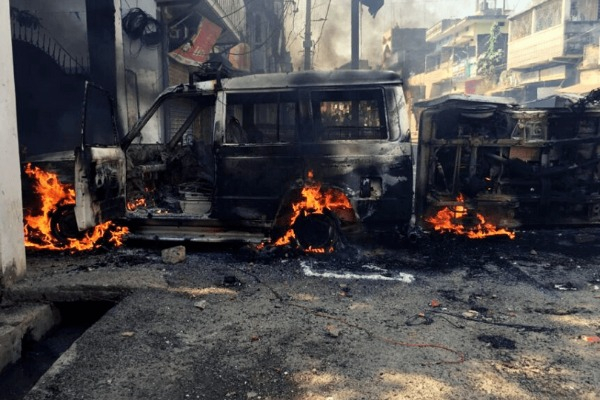 The Election Commission has removed the District Magistrate and the Superintendent of Police of Munger over the violence during a Durga Puja event early this week, even as a group of protesters went on the rampage in the town on Thursday, setting some police stations and outposts on fire and ransacking the SP office

The poll panel Thursday also ordered an inquiry into the firing and stone-pelting during the immersion of an idol of goddess Durga late Monday night in which one person had died and several others were injured.
The election commission has asked Magadh Divisional Commissioner Asangba Chuba Ao to complete the probe within a week.
Rajesh Meena is District Magistrate and Lipi Singh is SP of Munger. The EC statement said Munger will get a new DM and a Superintendent of Police Thursday itself.
Alleging that no action was taken against the SP and other police personnel over the Monday night incident, the agitators allegedly torched muffasil and women police stations in the town.
They also allegedly set police outposts at Purab Sarai and Basudeopur on fire, and ransacked the SP office and several other police stations and outposts
The office of Sub Divisional Officer (SDO) was also allegedly targeted by the protestors, official sources said.
Witnesses said that finding themselves outnumbered, the police personnel at all these stations escaped from the premises
Official sources said the agitators went berserk and also tried to set kotwali and Kasim bazar police stations on fire, but there they faced a strong resistance from the policemen who fired in the air to disperse the mob
They burnt tyres near Rajiv Chowk in the Munger town, demanding action against the SP and the police personnel responsible for allegedly opening fire during the idol immersion procession.
Additional Director General of Police (Headquarters) Jitendra Kumar told PTI-Bhasha in Patna that extra police force has been sent to Munger
Deputy Inspector General of Police, Munger, Manu Maharaj led a flag march in Munger town to bring the situation under control
The RJD-helmed Grand Alliance has strongly criticised the Monday incident, likening the district police with General Dyer of infamous Jallianwala Bagh incident in Punjab during British rule on April 13, 1919.
IPS officer Lipi Singh is the daughter of RCP Singh, the JD(U) leader in the Rajya Sabha
Coming on the eve of the first phase of polling, the incident had its impact voting too as two of the three Assembly seats -- Munger, Jamalpur -- in the district witnessed lower voter turnout as compared to the 2015 polls.
While Munger constituency had witnessed a poll percentage of 54.26 in 2015, it recorded 47.89 Wednesday. Similarly, the decline was from 49.70 per cent to 47.24 per cent in Jamalpur this time.
But Tarapur constituency recorded a polling percentage of 54.80 this time compared to 52.66 in 2015
State minister and senior JD(U) leader Shailesh Kumar is in the fray from Jamalpur seat
Meanwhile, the police department has ordered the removal of in-charges of muffasil police station and Basudeopur outpost in connection with the October 26 firing and baton-charge incidents
RCP Singh was mobbed Wednesday by angry protesters demanding action against the "guilty officials" when he visited Begusarai, where polling is scheduled for November 3
Begusarai is the Lok Sabha seat of BJP leader and Union minister Giriraj Singh who had condemned the Munger incident and sought action against "erring officials no matter how highly connected they may be?.