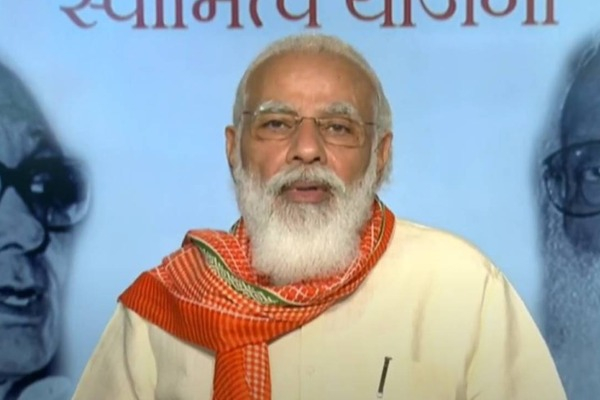 Prime Minister Narendra Modi on Sunday launched the physical distribution of property cards under the 'SVAMITVA' (ownership) scheme via video conferencing, and asserted that it is a "historic move" that will transform rural India

This will pave the way for villagers to use property as a financial asset for taking loans and other financial benefits, and end disputes among villagers over land ownership, he said.
On the occasion, Modi also interacted with several beneficiaries of the Survey of Villages and Mapping with Improvised Technology in Village Areas (SVAMITVA) scheme and said it is big step for the country towards becoming 'aatmanirbhar' (self-reliant)
"Experts across the world have stressed that property ownership rights play a big role in a country's development," he said to highlight the significance of the measure and noted that only one-third population globally has legal record of the properties they own.
The youth living in villages now can avail of bank loans against their properties to start out on their own, he said, asserting it is necessary for a developing country like India to have clear land ownership rights.
Property rights will give the youth self-confidence that can lead to their self-reliance, he said.
The beneficiaries are from 763 villages across six states, including 346 from Uttar Pradesh, 221 from Haryana, 100 from Maharashtra, 44 from Madhya Pradesh, 50 from Uttarakhand and two from Karnataka.
Modi said his government will try to give every household similar property cards over the next three-four years.
The Prime Minister's Office (PMO) has said the launch will enable around one lakh property holders to download their property cards through an SMS link sent on their mobile phones, and this would be followed by the physical distribution of property cards by respective state governments
The prime minister spoke against the backdrop of the pictures of socialist icon Jayaprakash Narayan and RSS stalwart Nanaji Deshmukh, both of whom have their birth anniversary on Sunday, and recalled their ideals of village empowerment.
Noting that Deshmukh had observed that when villagers remain trapped in disputes, neither will they be able to develop themselves nor the society, Modi said he believed the ownership will become a great medium to end many disputes in villages
He said an unprecedented level of development has taken place in villages over the last six years, which never happened in the preceding six decades.
People have got benefits like having bank account, electricity connection, access to toilets, getting gas connection, having a pucca house and a piped drinking water connection.
He added that a major campaign to connect every village in the country with the optical fiber connection is also going on at a fast pace.
The 'SVAMITVA' scheme will make village management easier for gram panchayats in a systematic way like municipalities and municipal corporations, he said.

After over 3 months, less than 40k COVID cases reported in single day across country: Govt data