Will not sign death warrant of farmers: Cong in RS on farm bills 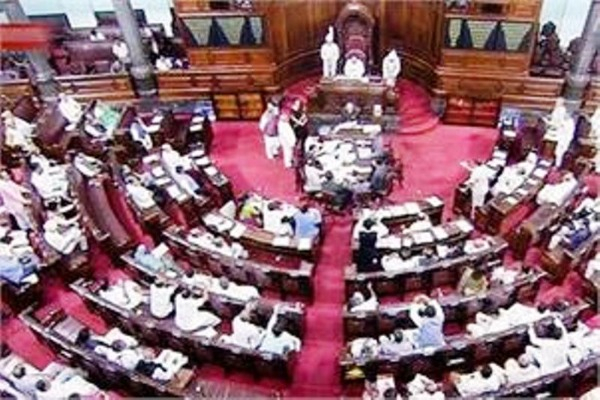 Opposition parties led by the Congress criticised the farm bills tabled in Rajya Sabha on Sunday, saying they will not sign on the "death warrant" of farmers

The opposition charged that the two bills are aimed at benefitting big corporates and ending the minimum price based procurement by the government.
Rajya Sabha took up the discussion on The Farmers' Produce Trade and Commerce (Promotion and Facilitation) Bill, 2020 and The Farmers (Empowerment and Protection) Agreement of Price Assurance and Farm Services Bill that have already been passed by Lok Sabha.
K K Ragesh (CPI-M), Derek O'Brien (TMC), Trichi Siva (DMK) and K C Venugopal (Congress) moved resolutions for sending the two bills to a select committee of the House for consideration before they are taken up for passage.
Initiating the discussion on these two bills, Congress leader Partap Singh Bajwa, who hails from Punjab, described the proposed laws as "ill-conceived and ill-timed" and said his party "completely rejects" them.
He said the bills are against land owners across the country, especially those of Punjab, Haryana and western Uttar Pradesh.
"We will not sign on death warrants of farmers", he said.
With agriculture being a state subject, he said the bills are against the federal cooperative spirit.
"We do not want any tinkering in APMC and the minimum support price ( MSP)," he said, and wondered what was the need to bring these bills during COVID-19.
Bajwa said farmers are on streets to protest against these two bills. "Those whom you want to benefit are on the streets".
The Congress leader said that the BJP's alliance partner Akali Dal has already opposed the Bills and Harsimrat Kaur Badal resigned from the Union Cabinet.
Bajwa said the bills have been brought with an "intention of ending the MSP (minimum support price) operations".
"Slowly, the government will come out of this and then Ambani, Adani and big corporate houses will enter (market)," he alleged.
The Congress leader said the two bills are against the economic interest of Punjab, which has contributed a lot in making India self-sufficient in foodgrain production.
Defending the two Bills, Bhupender Yadav of the BJP charged that the Congress was doing politics over this issue and misleading farmers.
He asked the Congress why the farmers' income did not increase in the last 60-70 years even as the country become self-sufficient in farm production.
These two important bills are the biggest agriculture reform in the country and will give justice to farmers by increasing their income, Yadav said.
He rued that food processing level is still very low in India and said the new age agriculture bills will boost processing, marketing, and exports of farm produces.
Yadav said a report of working group of agriculture production in 2010 suggested similar reforms. "Today, you (Congress) is doing politics. You are doing injustice with farmers because of politics," he said.
However, he said the country and farmers are understanding the "politics" of the Congress. Farmers are a vote bank for the Congress, he said.
He highlighted various schemes and programmes launched by the prime minister in the last six years for the growth of the agriculture and allied sectors while noting that the budget for the agriculture sector has been enhanced.
Yadav said the government will continue to purchase crops at the minimum support price (MSP), which will prove the "falsehood" spread by the Congress.
"Opposition should stop doing politics and also misleading farmers," he said.
Yadav also said the contract farming already exist in many states including Punjab and Haryana.
"We are not taking away land of farmers," he said, and added that the two bills are only meant to harness the huge potential of the agriculture sector.
TMC leader Derek O'Brien demanded that the Bills should be send to a select committee.
"These bills need to be debated in Parliament. You have the numbers to have your way and we have the right to have our say and to keep you on track of Parliamentary democracy. This is very very dangerous trend we are following. Select committee is not a hand break...it is there to contribute. I am going to move select committee," he said.
The TMC leader said the States have not been consulted on these Bills and questioned the government's tall promises and its credibility.
"The PM said the opposition is trying to mislead the farmers. Let us see what credibility you have to make these speeches. You promised to double farmers' income by 2022. At current rate, the farmer incomes would not double till 2028. I can also give big talk," he said.
"You gave big lecture on 'notebandi'. what has happened? After 50 minutes of announcing 'notebandi', Mamata Banerjee said withdraw this draconian decision. We told you but you did not listen," he added.
Noting hat the government promised two crore jobs every year, he said: "Now you have the highest unemployment. You credibility is low to make promises."
SP's Ram Gopal Yadav said there seems to be some compulsion that the ruling party does not want to discuss the bills and is in a hurry to pass them.
He asked how farmers would find corporations to sell their produce.
"It appears that this bill has not been drafted by you. A son of a farmer cannot draft such a bill. When you go back to your native place, the youth would ask you what were you doing when our death warrants were being issued in Parliament," he asked.