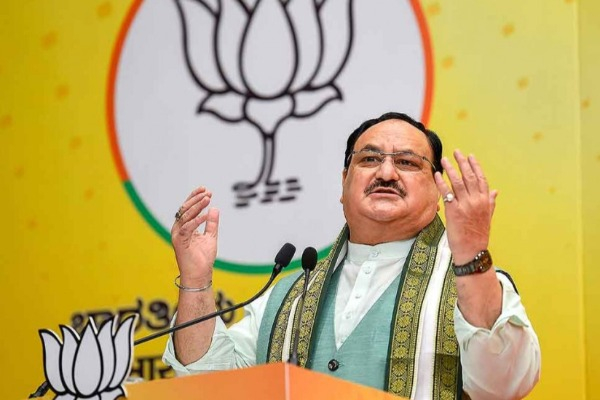 BJP President J P Nadda on Tuesday described the Supreme Court decision on the PM CARES Fund as a "resounding blow to the nefarious designs" of Congress leader Rahul Gandhi and his "band of rent a cause" activists.

"The country very well knows that the orchestrated smear campaign against PM CARES is an attempt by the Congress to wash its sins," he said.
Rubbishing the Congress' criticism on the issue, another BJP leader and Union minister Ravi Shankar Prasad told a press conference that "transparency is writ large in the PM CARES Fund".
The minister underscored that the fund will be audited, as he accused Gandhi of sparing no effort to weaken the country's resolve in its fight against COVID-19.
The apex court has destroyed the "conspiracy" sponsored by them, Prasad said targeting Gandhi and the Congress.
Earlier in the day, the Supreme Court refused to direct the Centre to transfer the contributions made to the PM CARES Fund for battling the COVID-19 pandemic to the National Disaster Response Fund (NDRF).
"The verdict by the Supreme Court on PM CARES is a resounding blow to the nefarious designs of Rahul Gandhi & his band of 'rent a cause' activists. It shows that the truth shines despite the ill intent and malicious efforts of the Congress party and its associates," Nadda tweeted.
Coming down heavily on Gandhi, the BJP chief said his "rants" have been repeatedly dismissed by the common man who has "overwhelmingly" contributed to the PM CARES Fund.
With the highest court also pronouncing its verdict, will Rahul and his "rent a cause activist army" mend their ways or embarrass themselves further, he asked.
The BJP president alleged that the Gandhi family treated Prime Minister's National Relief Fund (PMNRF) as its "personal fiefdom for decades and brazenly transferred citizens' hard-earned money from PMNRF to its family trusts".
He said the "orchestrated smear campaign against PM CARES is an attempt by the Congress to wash its sins".
Gandhi had on Monday tweeted "PM CARES for Right To Improbity" while tagging a news report which alleged that the Prime Minister's Office had denied anI application seeking information on the Fund.
The SC judgement came on a PIL filed by NGO 'Centre for Public Interest Litigation', seeking a direction that all the money collected under the PM CARES Fund for the COVID-19 pandemic be transferred to the NDRF.
Speaking to reporters, Prasad said the PM CARES Fund is a registered public trust create to fight emergencies like the coronavirus and added it has so far contributed Rs 3,100 crore in the battle against the pandemic.
Out of this, Rs 2,000 crore was spent on procuring over 50 thousand ventilators, Rs 1,000 crore was given to states to help migrant labourers and Rs 100 crore for vaccine research, he said.
This is the highest number of ventilators made available for critical care in one go since independence, he said.
Hitting out at the Congress and the Gandhi family, he said foundations run by the family were donated money by the National Disaster Response Fund and from the Union budget during the UPA rule, while the PM CARES Fund has been used transparently.
The fund was launched by the government after the COVID-19 outbreak.
"Transparency is writ large in the PM CARES Fund both in the terms of legal requirement and the management of the fund received," he said, adding that there is no corruption allegation against the Modi government in the six years of its rule so far.
Following the apex court judgment, a number of Union ministers and other BJP leaders also took a swipe at Rahul Gandhi.
"And once again the faces of habitual liars stand exposed. The verdict of Hon'ble Supreme Court on #PMCARES is a stinging slap on the face of those whose single point agenda is to mislead people," Union Minister Dharmendra Pradhan said on Twitter.
He tweeted, "The 'King of Con' talking about transparency can now introspect as to what makes him a constant disappointment not just for his party but for the entire nation. Perhaps @RahulGandhi is so used to insults and humiliations that he can't keep calm without embarrassing himself.