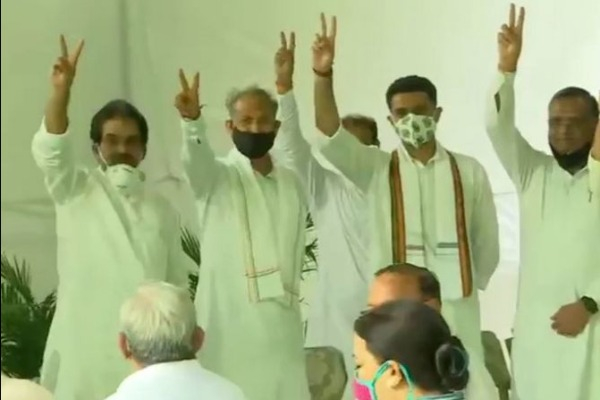 Sachin Pilot met Rajasthan Chief Minister Ashok Gehlot Thursday, the first time after he openly rebelled against the senior leader a month back.

Party leaders K C Venugopal, Avinash Pande, Randeep Surjewala, Ajay Maken and Govind Singh Dotasra were also there at the meeting, posing together for the cameras at Gehlot's official residence.
Pilot and Gehlot shook hands in a moment marking the return of the sacked deputy chief minister and 18 other dissident MLAs to the party-fold, after the intervention earlier this week by the top Congress leadership in Delhi.
Their meeting was followed by the Congress Legislature Party meeting, ahead of Friday's assembly session.
The opposition BJP has already announced that it will seek a no-confidence motion against the Gehlot government during the session.
The Congress has 107 MLAs in the 200-member assembly, and the BJP 72