PM recalls valour of soldiers in Kargil, says wars fought on borders and within country too 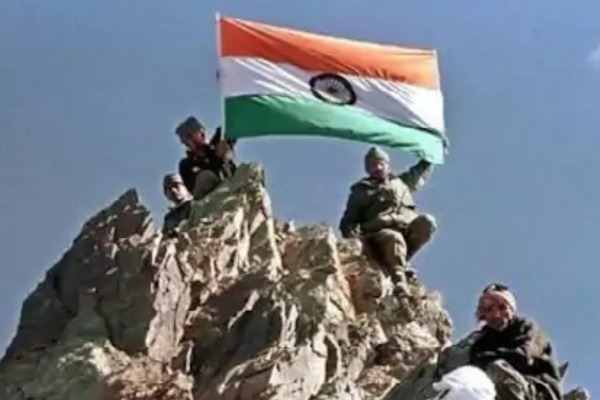 Hailing the valour of the armed forces during the Kargil war, Prime Minister Narendra Modi on Sunday asked people to speak and act keeping in mind the morale of soldiers and asserted that wars are fought not just on borders but on many fronts within the country too

In his monthly 'Mann ki Baat' radio address, which coincided with the 21st anniversary of Kargil Vijay Diwas, the prime minister also hit out at Pakistan for the conflict and said Islamabad responded to New Delhi's hand of friendship by stabbing it in the back.
The Kargil war was declared over on July 26, 1999, after Indian soldiers pushed back Pakistani troops, a bulk of them drawn from the neighbouring country's Northern Light Infantry, from the captured peaks in Kargil.
?People must remember that their conduct and remarks should boost the morale and respect of soldiers, Modi said, urging everyone to do everything to further national unity
"People bound by a thread of unity with the mantra that the nation is above everything else bolster the strength of our soldiers more than a thousand times," he said
Modi also spoke of the dangers of social media. At times, without paying heed to the essence, people encourage certain things on social media "that are detrimental to the country", he said
"There are times when we forward things out of sheer curiosity. Despite knowing that it is wrong, we keep doing it. These days, wars are fought not just on borders, they are fought on many fronts simultaneously within the country too.
?And every citizen has to decide his or her role in that. We, too, should determine our roles, fully keeping in mind the soldiers fighting on the borders under the harshest of conditions," he said
The prime minister's comments come as Indian and Chinese armies are locked in a standoff in Ladakh
Modi recalled the late Atal Bihari Vajpayee's Independence Day speech after the Kargil war and said it is relevant even today
Vajpayee, he said, had then reminded the nation of Gandhi's mantra -- in the face of any dilemma, in order to decide what to do or what not to do, one must think of the poorest and the most helpless person of India; one must assess whether one's deed will result in benefitting that particular person or not
"Going beyond Gandhi-ji's thought, Atal ji had said the Kargil war has given us another mantra. Before taking any important decision, we should think whether our step, our endeavour is befitting to the honour of the soldier who laid down his life in those remote mountains," the prime minister as he played out a brief clip of Vajpayee's speech
India can never forget the circumstances under which the conflict took place, he stressed
"Pakistan had embarked upon this misadventure, nursing delusions of encroaching upon Indian soil, to distract attention from the internal strife prevailing there. India was then in the process of making efforts to foster good relations with Pakistan," he said
Referring to an old saying in Sanskrit, Modi said, "To the wicked, enmity with one and all for no reason comes naturally. People with such a disposition keep thinking of harming even their well-wishers? that is why when India extended a hand of friendship, Pakistan tried to respond, stabbing in the back."
When the Indian Army displayed deeds of valour, when India demonstrated its might, the whole world watched, the prime minister said
"You can imagine ... the enemy lodged in the soaring mountainous heights and our armed forces fighting from down below. But it was not about victoriously conquering the heights. It was the victory of high morale and bravery of our armed forces in the truest sense of the term," he said
He said he too got an opportunity to visit Kargil and witness the gallantry of the jawans and described the day as ?one of the most precious moments? of his life
Referring to Independence Day celebrations this year, the prime minister said they come in the midst of the COVID-19 pandemic and would be very different.
Urging the youth to take a pledge of freedom from the pandemic this August 15, Modi said, "Take a resolve for a self reliant India, a resolve to learn and teach something new and a resolve to earnestly carry out our duties."
He also expressed solidarity with all those affected by floods and heavy rains across India
The Centre, state governments, local administrations, the National Disaster Response Force (NDRF) and social organisations are working to provide all possible assistance to those affected, the prime minister said
He gave examples of people who transformed distressing times into opportunities during the pandemic, applauding the role of the people from Bihar, Jharkhand and the northeast who used local products and skills during the pandemic
During his address, the prime minister also interacted with students who had scored well in their Board exams.

Urge MPs, parties to ask sharpest of questions in Parliament, but should allow govt to respond: PM