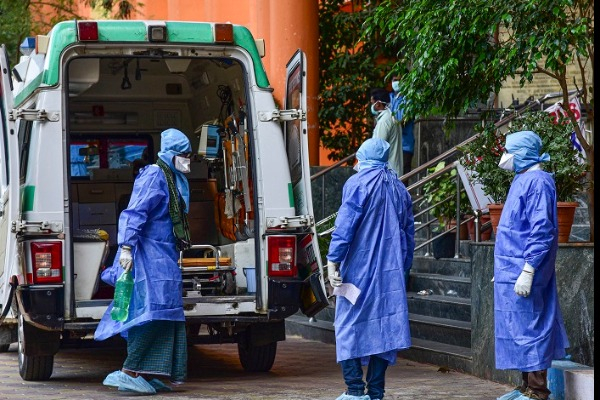 The number of active COVID-19 cases climbed to 80,722. As many as 60,490 people have recovered and one patient has migrated, it said.?
"Thus, around 41.61 per cent patients have recovered so far," a senior Health Ministry official said
The total confirmed cases includes foreigners
Of the 146 deaths reported since Monday morning, 60 were in Maharashtra, 30 in Gujarat, 15 in Delhi, 10 in Madhya Pradesh, seven in Tamil Nadu, six in West Bengal, four each in Uttar Pradesh and Rajasthan, three in Telangana, two each in Himachal Pradesh, Jammu and Kashmir and Karnataka and one in Kerala.
Of the total 4,167 fatalities, Maharashtra tops the tally with 1,695 deaths followed by Gujarat with 888 deaths, Madhya Pradesh with 300, West Bengal with 278, Delhi with 276, Rajasthan with 167, Uttar Pradesh with 165, Tamil Nadu with 118 and Andhra Pradesh and Telangana with 56 deaths each.
The death toll reached 44 in Karnataka and 40 in Punjab
Jammu and Kashmir has reported 23 fatalities due to the disease, Haryana has 16 deaths, while Bihar has registered 13 and Odisha has seven deaths
Kerala and Himachal Pradesh have reported five deaths each so far, while?Jharkhand and Assam have recorded four deaths each so far
Chandigarh and Uttarakhand each have recorded three COVID-19 fatalities each, while Meghalaya has reported one fatality so far, according to the ministry data.?
More than 70 per cent of the deaths are due to comorbidities, according to the ministry's website.? ? ? ? ?
According to the ministry data updated in the morning, the highest number of confirmed cases in the country are from Maharashtra at 52,667 followed by Tamil Nadu at 17,082, Gujarat at 14,460, Delhi at 14,053, Rajasthan at 7,300, Madhya Pradesh at 6,859 and Uttar Pradesh at 6,532. ?
The number of COVID-19 cases has gone up to 3,816 in West Bengal, 3,110 in Andhra Pradesh and?2,730 in Bihar.It has risen to?2,182 in Karnataka, 2,060 in Punjab, 1,920 in Telangana, 1,668 in Jammu and Kashmir and 1,438 in Odisha
Haryana has reported 1,184 coronavirus infection cases so far, while Kerala has 896 cases. A total of 526 people have been infected with the virus in Assam and 377 in Jharkhand
Uttarakhand has 349 cases, Chhattisgarh has 291, Chandigarh has reported 238 cases, Himachal Pradesh has 223, Tripura has 194 and Goa has registered 67 cases so far
Ladakh has reported 52 COVID-19 cases, Puducherry has 41 instances of the infection, Manipur has 39 while Andaman and Nicobar Islands has registered 33 infections
Meghalaya has registered 14 cases. Nagaland has reported three cases of the infection, Dadar and Nagar Haveli and Arunachal Pradesh have reported two cases of the virus each, while Mizoram and Sikkim have reported a case each till how
"2,970 cases are being reassigned to states," the ministry said on its website, adding, "Our figures are being reconciled with the ICMR."
State-wise distribution is subject to further verification and reconciliation, it said.