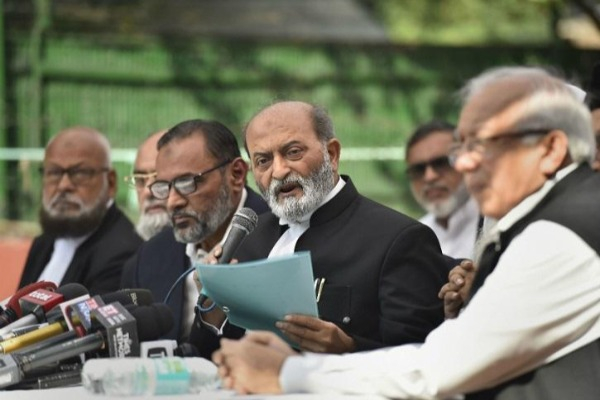 The All India Muslim Personal Law Board (AIMPLB) on Sunday favoured seeking a review of the Supreme Court's judgement in the Ayodhya issue, and said it was against accepting the five-acre alternative land given for a mosque.

"The land of the mosque belongs to Allah and under the Sharia, it cannot be given to anybody," AIMPLB secretary Zafaryab Jilani told reporters after a meeting of the board here.
"The board has also categorically stated that it was against taking five-acre land in Ayodhya in lieu of the mosque. The board is of the view that there cannot be any alternative to the mosque," he said.
The installation of a statue of Lord Ram inside the Babri Masjid in the night of December 23, 1949, "was unconstitutional", Jilani said, adding, "So, how did the Supreme Court consider them as 'araadhya' (eligible for worshipping). They (idols) cannot be considered as 'araadhya' (eligible for worshipping) even as per Hindu religion."
The Board said the five-acre alternative land for a mosque awarded by the Supreme Court "will neither balance equity nor repair the damage caused", and declined to accept it. "We feel that Sunni Wakf Board shall give respect to this view of the community at large," it said.
Earlier in the day, the Jamiat Ulama-i-Hind also decided to file a review petition challenging the Supreme Court's Ayodhya verdict.
Jamiat chief Maulana Arshad Madani said they took the decision following extensive deliberations involving lawyers and experts.
The Supreme Court, in its verdict in the Babri Masjid-Ram Janmabhoomi title case on November 9, said the entire 2.77 acres of disputed land should be handed over to the deity Ram Lalla, who was one of the three litigants.
The five-judge Constitution bench also directed the Centre to allot a five-acre plot to the Sunni Waqf Board in Ayodhya to build a mosque.
Later in a statement issued here, the AIMPLB said, "In the context of the guarantees under the Places of Worship Act, 1991, the Supreme Court, in this judgement itself, has observed that the protection granted therein is to ensure and protect fundamental values of the Constitution and emphasize human dignity and fraternity, tolerance, respect and acceptance of equality of all religious faith. The Muslim community contested this litigation to ensure and secure the said fundamental values of the Constitution in relation to this case."
"It is clear that the state has no religion and secularism is basic feature of the Constitution. Earlier the court's judgments have recorded that the state's action were discriminatory against one religion favouring the other religion. In 1994, the Supreme Court has held that the act of demolition of mosque in 1992 was a 'national shame' and that it shook the faith of the minorities in the rule of law and constitutional process," it said.
The court further stated that this "failure amounted to betrayal of the Muslim community at large".
On the alternative plot for a mosque, the Board said, "We feel that the restitution by granting five acres land, where fundamental values have been damaged to the extent of causing national shame, will in not any manner heal the wounds caused. Even otherwise the effect of this direction would amount to shifting the mosque from one place to another by judicial order without any provocation by the community, which always tried to protect this mosque. Mosques are essential for religious practices of Muslims. Building the same mosque at some other site in situations like this, is also not permissible as per Islamic law."
"...all litigants protecting the Babri Masjid, including the Sunni Wakf Board, have always reposed trust in our representative capacity for various issues of Muslims including the present one. In that capacity, we on behalf of the community at large, make it clear that the five-acre land, as directed in the present judgement will neither balance equity nor repair the damage caused in the country.
"Accordingly, on behalf of the Muslim community, we decline to accept the...land. We also feel that Sunni Wakf Board shall give respect to this view of the community at large," the AIMPLB said.