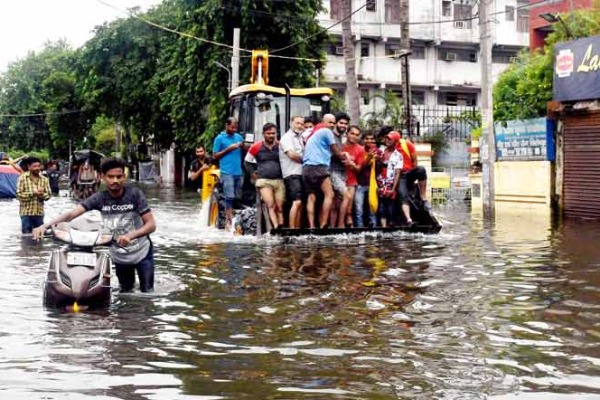 After being pounded by heavy rain over the weekend, most parts of the Bihar capital remained submerged even as the state-wide death toll mounted to 25

In Patna, there has been a let up in rainfall since morning though the sky is overcast and the IMD has predicted showers later in the day
According to the state disaster management department, six casualties have been reported from Gaya district where five persons were buried alive in a wall collapse while another person was drowned in a river which was in spate because of incessant rains
In addition, police in the adjoining district of Jehanabad confirmed the death of a three-year-old girl who was crushed to death when the wall of an old house, adjacent to a street where she was playing, caved in
On Sunday, 18 deaths were reported from across the state in mishaps attributed to the torrential rainfall
Unconfirmed reports, however, put the death toll at more than 30
The disaster management department said that the state government has urged the Indian Air Force to send a helicopter for air-dropping of food packets and other relief material in marooned areas
Deputy Chief Minister Sushil Modi, whose own residence was affected by the deluge, was seen doing the rounds of the city clad in a T-shirt and shorts, and issuing instructions to officials
The district administration has ordered closure of all schools till October 1 as a preventive measure and warned of strict punishment to those who violated the direction and "put the lives of teachers and students at risk"
District Magistrate Kumar Ravi has said that sump houses were working round theclock to flush out water from inundated streets and pointed out that "a not too high" water level in the Ganga meant that there would be no problem of reverse flow
Motorcyclists were seen driving through knee-deep waters after covering the silencers of their two-wheelers with plastic bottles and pipes inserted to allow emission of fumes without water entering the exhaust pipes
At some places, people living in houses situated on either side of a street helped each other with items of daily use which were rolled down on unfurled 'gamchas' (a thin towel), corners of which were held by people standing atop boundary walls
Patna Nagar Nigam personnel, donning yellow raincoats, could be seen at various spots trying to unclog the manholes that have been choked by polythene and debris a common sight in the city which has witnessed unregulated construction which has contributed to the water-logging
Chief Minister Nitish Kumar had spoken to P K Mishra, Principal Secretary to the Prime Minister, on September 21 urging him to take steps to check the water level in the Ganges here which had then risen to alarming levels
More than a million cusecs of water were subsequently released through the Farakka barrage downstream
Social media has been abuzz with the heart-rending image of a rickshaw-puller who broke down upon being caught in chest-deep water, unable to pull out the vehicle on which he depended for a living
In the video, a couple apparently living on the upper story of an adjacent house can be heard asking the hapless man to rush to a safer spot, assuring him that they will keep a watch on his cycle rickshaw until the water subsided and he was able to take it back.