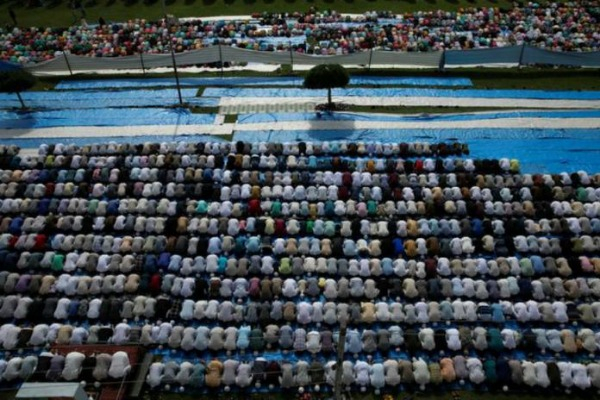 Barring a few minor incidents in which some people were injured, Eid al-Adha festivities passed off peacefully in Jammu and Kashmir, and there was no firing anywhere in the Kashmir Valley, the police said on Monday.

Inspector General of Police (Kashmir) S P Pani also said the Jammu and Kashmir administration was committed to maintain peace and order and the state police worked in this direction.
"The Eid namaz was offered in different mosques and after the prayers, the congregations dispersed peacefully. There have been a couple of minor localised incidents of law and order which have been handled very professionally.
"In these incidents, there have been a couple of injuries which have been reported. Otherwise the entire Valley situation is peaceful. I strongly deny any incident of firing anywhere in the Kashmir Valley," he told a press conference here.
The IGP also said no medicolegal case has been reported, and according to the statistics available with the police, injuries to only a couple of people have been reported.
"I am saying that they were admitted in the hospital but they are absolutely stable," he said.
Referring to the law and order situation, Pani said some arrests were made but these were "absolutely in the ambit of law" and all those arrested were produced before the court and legal actions are being taken.
"At this stage, every district has got its own priority and depending on the local situation, depending on the incident, they respond and they try to maintain the order," he said.
The IGP also said there has been a malicious campaign on social media and the contents of these were strongly refuted by the police. "We request citizens not to pay attention to such things. We have strongly denied this," he said, referring to a tweet by a Pakistani journalist in which he alleged a fratricidal incident involving security forces in the Kashmir valley.
Pani said lifting or imposing restrictions was a dynamic process and the administration was giving some relaxation as per the local situation.
The IGP thanked the people for cooperating with the administration in maintaining the order and said the reasonable restrictions imposed at certain sensitive places were completely maintained.
"Depending on the local situation, some relaxation has been given as the situation has developed," he said.
Rohit Kansal, the Principal Secretary in the Jammu and Kashmir administration, who also addressed the media, said not a single bullet has been fired by the security forces in the Kashmir Valley on Monday nor there has been any casualty.
"There have been some reports in the media about firing by security agencies and deaths. The police carried out a detailed briefing and I would like to reiterate and categorically deny that any firing incident has happened in Jammu and Kashmir," he said.
Kansal said the district and divisional administrations carried out a number of activities, including interacting with maulvis and common people, ensuring trading activities in markets, and as a result the Eid festival has been extremely peaceful.
He said the authorities were watching the situation very carefully and the overall policy of the government has been to ease restrictions as much as possible.
"You saw relaxation of restrictions on Saturday, you saw greater relaxation of restrictions on Sunday, on Eid you saw people being facilitated. I told you that there was large Eid congregations in a number of places. If you carry out a round of the market today evening, you will see traffic moving, people being facilitated to go and greet relatives," he said.
However, he said the situation was dynamic and the administration will not allow any mischievous elements to disturb the peace at any cost. "For this purpose, reasonable restrictions were required to be imposed."
Kansal said that in order to alleviate the problems being faced due to the lack of connectivity, people are being facilitated through 300 public points to talk to their relatives over phones.
"Over 5,000 calls were made from the Srinagar office alone by people wishing to greet their near and dear ones," he said.
He also said there was no overall number available on people who were detained.
On the eve of Eid al-Adha, restrictions were eased in the Valley to allow people to shop for the festival. But the usual hustle and bustle of Eid al-Adha, one of the biggest festivals in Kashmir, was missing.
Normal life in the Valley has been paralysed owing to heavy security deployment, restrictions on movement and curtailing of communication links after the Centre revoked Jammu and Kashmir's special status under Article 370 and moved a bill proposing bifurcation of the state on August 5.
Last Friday, people were allowed to visit neighbourhood mosques and offer prayers there.
President Ram Nath Kovind on Wednesday declared the abrogation of special status given to Jammu and Kashmir under Article 370 after both Houses of Parliament passed a resolution in this regard.
On Saturday, he gave assent to a bill passed by the Parliament to split Jammu and Kashmir into two Union Territories -- Jammu and Kashmir, and Ladakh -- which will come into existence on October 31.