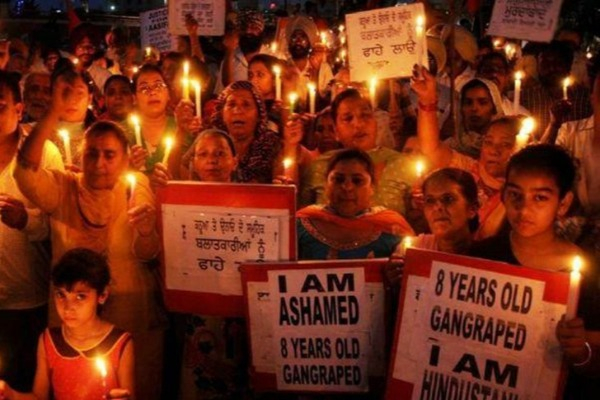 Six of the seven accused in the horrific gangrape-and-murder case of an eight-year-old girl in Jammu and Kashmir's Kathua were convicted by a court here on Monday, lawyers said.

A seventh accused, namely Vishal -- son of main accused Sanji Ram -- was acquitted by the court, giving him the 'benefit of doubt', said Farooqi Khan, who represented the victim's family in the court.
The court pronounced its much-awaited verdict away from the gaze of media which has gathered outside the premises.
Sanji Ram, the caretaker of the temple where the crime took place, Special Police Officer Deepak Khajuria and Parvesh Kumar, a civilian, have been convicted under Ranbir Penal Code sections pertaining to criminal conspiracy, murder, gangrape and destruction of evidence, the lawyers said.
Two police officials -- Sub Inspector Anand Dutta and Head Constable Tilak Raj --and a special police officer Surender Verma have been convicted for destruction of evidence, they said.
The quantum of sentence will be pronounced by the court at 2 PM, they said.
The prosecution team, comprising lawyers J K Chopra, S S Basra, Harminder Singh and Bhupinder Singh, issued a brief statement, saying they would examine the judgement and may go in for appeal against the sole acquittal.
"We have sought capital punishment against all three accused convicted of murder and gang rape. It was hard work of all of us and a perfect blend of investigation and legal brains. We have achieve 99 per cent result," the statement said.
The crime branch of J&K Police had filed the chargesheet against eight persons, including a juvenile.
According to the 15-page chargesheet filed in April last year, the girl was kidnapped on January 10 that year and was allegedly raped in captivity in a small village temple, exclusively manned by Ram, after having been kept sedated for four days. She was later bludgeoned to death.
The day-to-day trial commenced in the first week of June last year at the district and sessions court in Pathankot in neighbouring state of Punjab, about 100 km from Jammu and 30 km from Kathua, after the Supreme Court ordered on May 7, 2018 that the case be shifted out of Jammu and Kashmir.
The apex court order came after lawyers in Kathua prevented Crime Branch officials from filing a chargesheet in the sensational case, which shocked the nation.
The Crime Branch arrested Ram, his juvenile nephew and his son Vishal, and two special police officers Khajuria and Verma. Raj and Dutta, who allegedly took Rs 4 lakh from Ram and destroyed crucial evidence, were also arrested.
The charges of rape and murder were framed by the district and sessions judge against seven out of the eight accused.
The trial against the juvenile is yet to begin as his petition on determining his age is to be heard by the Jammu and Kashmir High Court.
The court framed charges under the Ranbir Penal Code(RPC), including Sections 120-B (criminal conspiracy), 302 (murder) and 376-D (gang-rape), according to the prosecution.
The court also framed charges of destruction of evidence and causing hurt by poisoning under Section 328 of the RPC.
The two policemen - Raj and Datta - were also charged under Section 161 (public servant taking illegal gratification) of the RPC.
All the accused, barring the juvenile, were shifted to the Gurdaspur jail in Punjab following an intervention by the Supreme Court which also restricted appearance of the defence lawyers and limited it to one or maximum of two per accused.
The chargesheet said the girl had gone missing while grazing horses.
Investigators said the accused juvenile had abducted the girl on the pretext of helping her find her horses.
The abduction, rape and killing of the child was part of a carefully planned strategy to remove the minority nomadic community from the area, the chargesheet said.